"Alberto Giacometti: Toward the Ultimate Figure" 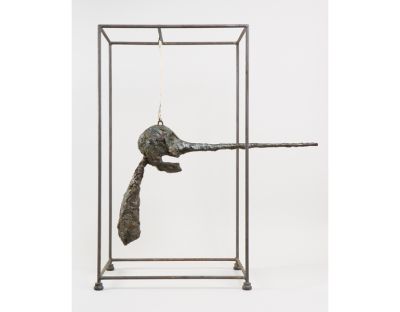 The Cleveland Museum of Art (CMA) announces ticket information for its next major exhibition, “Alberto Giacometti: Toward the Ultimate Figure.” The CMA presents its first exhibition dedicated to the work of Alberto Giacometti in almost 50 years.

Co-organized by the Fondation Giacometti in Paris and the Cleveland Museum of Art, “Alberto Giacometti: Toward the Ultimate Figure” features masterpieces focusing on Alberto Giacometti’s (1901–1966) major achievements of the postwar years (1945–66). Combining all media, sculpture, painting and drawing, the show of 60 works draws upon the deep resources of the artist’s personal collection and examines a central aspect of his oeuvre: his singular concern for the human figure. The touring exhibition opens in Cleveland and is on view in the Kelvin and Eleanor Smith Foundation Exhibition Hall from March 12 to June 12, 2022. “Alberto Giacometti: Toward the Ultimate Figure” will also be presented at the Seattle Art Museum; Museum of Fine Arts, Houston; and the Nelson-Atkins Museum of Art in Kansas City.

Widely acclaimed as one of the most important artists of the 20th century, Giacometti owes his fame to his invention of a unique style of rendering human figures. During the last years of his life, the thin and elongated bodies animated by tormented surfaces became emblematic of his final, mature style. The exploration of an elemental body, its placement in space and its relationship with the plinth are among the issues Giacometti confronted in trying to solve essential questions for modern sculpture in his continuous creative struggle. The process led him to create iconic human forms informed by a broad range of philosophical issues, as the exhibition reveals through the display of such masterworks as “The Nose” (1947–49) and “Walking Man I” (1960).

The CMA recommends reserving tickets through its online platform by visiting the Alberto Giacometti exhibition webpage. Tickets can also be reserved by phone at 216-421-7350 or on-site at one of the ticket desks. Tickets are expected to book quickly and are not guaranteed. Your first choice of date and time may not be available, so please have other date and time options in mind when reserving tickets. Advance ticket sales are highly recommended.

“Alberto Giacometti: Toward the Ultimate Figure” is co-organized by the Cleveland Museum of Art and the Fondation Giacometti, Paris. Generous support is provided in memory of Helen M. DeGulis, by Malcolm Kenney, and by Mr. and Mrs. Frank H. Porter Jr.