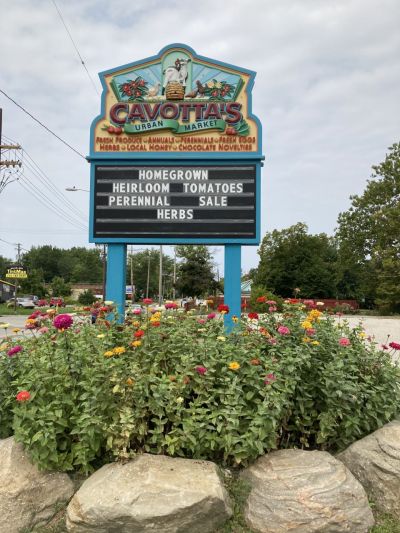 The City of Cleveland has been honoring outstanding individuals, businesses and organizations within the Italian American community for the past 17 years. Normally, Italian American Heritage Month and the honorees are celebrated at a ceremony held in the Cleveland City Hall Rotunda. Restrictions due to Covid-19, however, prevent us from gathering in person this year. In place of the live celebration, a video of the honorees and with remarks from Mayor Jackson, Councilman Zone and others will be available for viewing beginning October 5 at www.CLEItalianAmericans.com and on Facebook @CLEItalianAmericans.

Cavotta’s Garden Center was founded in 1930 by Felix and Angela Cavotta. Angela Laurienzo Cavotta was born in Matrice, Italy, then moved to Cleveland’s Little Italy with her family in the late 1800s. Angela married Felix Cavotta at Holy Rosary Church in 1912 and together they started the business at 19603 Nottingham Rd. in Cleveland, where they also made their home.

Cavotta’s was originally only a landscaping business. Felix’s son, Francis, had worked on the one-and-a-half-acre homestead with his father since he was a child. In fact, when Francis and his brother were old enough to be partners, the name of the business became Felix Cavotta and Sons Landscaping.

Francis took over the family business in 1971 when his father died. He expanded it by selling produce and garden statues he made from molds. As he got older, his health began to deteriorate and Fran, Jr. joined his father in the business until an accident prevented him from continuing. Angela, Fran’s sister who is named after her grandmother, stepped in to help her brother and took over the business in 2008. She decided to take the business in a new direction and expanded the offerings. She brought in chickens, goats and other animals.

Angela says that Cavotta’s Garden Center and Urban Farm is “a little country in the city.” She built greenhouses on nearby vacant lots to grow produce like greens, tomatoes and a variety of peppers. She sells them to the public as well as to local restaurants year-round. Cavotta’s also sells eggs, honey, annuals, perennials, statuary, and pottery. A recent addition is The Garden Bar, which serves appetizers using the produce grown on the property and has a regular schedule of live music. This allows patrons to not only visit to shop, but to enjoy the beauty of the farm.

The Mirabile family have owned and operated businesses in the Collinwood neighborhood of Cleveland for over 100 years, spanning more than three generations of the family. Their continued presence in Collinwood provides a connection to the neighborhood’s roots as an Italian American community.

Frank and Josephine (nee Sardo) Mirabile arrived in Cleveland around 1930 from Buffalo, NY. Shortly after, the Mirabile family purchased the building at 1025 Ivanhoe Rd. at the corner of Kipling Ave. They opened a barbershop, pool hall and tavern in that location.

After Frank and Josephine passed, their sons, Joseph and Robert, continued to operate the tavern and Italian restaurant. They soon closed the barbershop and pool hall to expand the restaurant business. Upon Joseph’s passing, the next generation of the Mirabile family consisting of Joseph’s sons Frank, Joseph, John, Robert, Mark, and Phillip, assumed operations. Today, Mirabile’s Restaurant still serves their traditional sauces, meatballs, pastas, chicken parmesan, and their popular Friday fish fries.

Messina Bakery at 1071 Ivanhoe Rd., just a few blocks from Mirabile’s Restaurant, is the second Collinwood business by the Mirabile family. It opened in 1990 and is operated by Frank and Mark Mirabile. Messina’s is named after the city in Sicily where the Mirabile ancestors originated. They specialize in homemade Italian bread, pizza, pastry, cakes, and Italian holiday traditions made from family recipes originating in Italy passed down through the generations.

Charles “Chuck” Giomuso was born and raised in Mayfield Heights, OH. He attended St. Joseph High School in Cleveland and graduated with the great class of 1970. Chuck obtained a bachelor’s degree from John Carroll University, then earned two Masters’ degrees, one in Business Administration from Lake Erie College and the other in Medical Physics from the Medical College of Ohio. In 1998, he founded Applied Medical Physics in Radiology, Inc. and, while he no longer consults, continues to serve as president of the company.

About 20-years-ago, Chuck joined St. Paschal Helping Hands Ministry. The group brings food, clothing and love to the homeless and less fortunate on the streets of Cleveland every Wednesday, year-round, rain or shine. At the summer weekly bocce games Chuck hosts at his home, the friends and former St. Joe’s classmates who attend help Chuck with his efforts in Helping Hands by donating money and items. So far, the generosity from those at the bocce games has raised $17,000 for the Helping Hands.

Since 2015, Chuck has been a member of Club Molisani in Wickliffe, OH. He became treasurer in 2017 and continues to serve the club in that role. Friend Mike Spena got Chuck involved in volunteering at the Italian Cultural Gardens and Chuck has been donating his time and effort there for the last 3 years.

Chuck has been married to wife, Carol, for 37 years and they have three grown children.  He and his family have traveled to Italy and Sicily. They are anxious to return and hope to connect with some of his Sicilian ancestors on the next visit.

Ann D’Amico is a practicing attorney who resides in Highland Heights, OH with her husband, Michael J. Caticchio. She grew up in South Euclid, OH and attended St. Gregory the Great Elementary School and Brush High School. She is a graduate of Miami University and Cleveland Marshall-College of Law.

Ann and her sister, Elaine, grew up in a family with a strong belief in the duty and importance of public service. Their father, the late Mayor Arnold D’Amico, served as a role model as did their mother, Mary, who was a tireless volunteer in the community. Growing up they were fortunate to live next door to aunts, uncles and cousins to whom they remain exceptionally close today. In addition to the support of her husband, Ann credits the strong Italian values she learned from her parents and family for the opportunities she has received in life.

As a teenager, Ann worked as a candy striper at Menorah Park in Beachwood, OH. Since graduating from law school, she has practiced primarily in family law. Ann enjoys working with parents and children as a Guardian Ad Litem, Parent Coordinator and a Mediator. Ann also enjoys working with Seniors in Highland Heights where she has served as a City Councilwoman for several years.

Ann has served as secretary, vice-president and president of the Geauga County Bar Association and on the board of Womensafe. She also serves as a volunteer Juvenile Diversion Magistrate in Lyndhurst, Vice-President of the Hillcrest Council of Councils and a director of the Friends of Mayfield Branch Library.

Italian Americans throughout Northeast Ohio have most likely seen Giovanni “Gio” Castiglione perform the national anthem of Italy in the past 10 years. Acclaimed as “the next Rocco Scotti,” Gio began singing the U.S., Canadian and Italian national anthems publicly at the age of 8. Since then, he’s been in demand to perform “Fratelli d’Italia” (in Italian) for several civic and sports events including Columbus Day in Cleveland, Miss Italia Pageant, Cleveland Challenge Cup of Bocce, Cleveland Summer Italian-American Festival, Summit County Italian American Festival, Italian American Night for the Lake County Captains, and the Opening Ceremony for Cleveland Italian American Heritage Month. Last summer he performed the U.S. National Anthem at Progressive Field for the Cleveland Indians.

Gio is a 2020 graduate of Solon High School where he performed with Solon’s nationally-acclaimed “Music In Motion” Show Choir, the school’s elite a cappella “Madrigals” ensemble, as a soloist with the Jazz Band, President of the SHS Drama Club, and as the first (and only) male member of the Starlettes precision dance team. He is a member of the Contemporary Youth Orchestra Chorus and has performed with Graham Nash, Melissa Etheridge, Kenny Loggins, and Tommy Shaw. Gio has also performed in 28 theatrical productions, most notably as The Beast in “Beauty & The Beast” and Dr. Neville Craven in “The Secret Garden.” Giovanni has sung professionally with the Swing City Big Band and 1159 Jazz Band. He is the bass of the youth quartet Wing It, a two-time international qualifier, ranked 16th in the world.

Giovanni is the youngest son of Dennis and Suzi Castiglione. He is a freshman at Bowling Green State University’s College of Musical Arts, majoring in vocal music education. He currently sings with BGSU’s Men’s Chorus and A Cappella  Chorus.

View the embedded image gallery online at:
https://www.lagazzettaitaliana.com/local-news/9562-2020-cleveland-italian-american-heritage-month-honorees#sigProId3cd8eba2d0
Tweet
More in this category: « The Quest to Identify a “Last Supper” Sculptor Ezio Listati, Partner at Thrasher, Dinsmore and Dolan, Named Honorary Consul to the Italian Government »