The Quest to Identify a “Last Supper” Sculptor 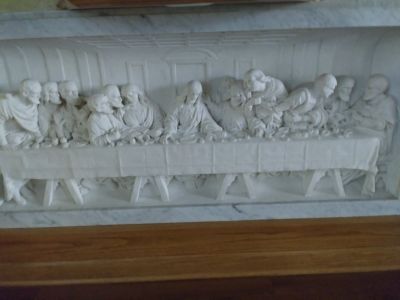 Over a year ago, while cold searching on an online newspaper for our family surname, Monti, I came across an intriguing article and illustration from the Cleveland Plain Dealer dated February 9, 1913. What really caught my attention was the title of the article, “Clevelanders Hew Last Supper in Marble.”

The article read as follows, “The above illustration shows the cut of the marble relief of Leonardo da Vinci’s, ‘Last Supper,’ which was just executed by Monti and Santoni, Cleveland sculptors, for Charles J. Sheffield for the Church of the Sacred Heart, Youngstown, Ohio. The carving was cut from a solid piece of marble and is 5 feet 3 inches long by 2 feet 4 inches high by 8 inches thick and is pronounced by the ablest critics to be one of the best marble carvings ever executed in Cleveland. Messrs, Monti and Santoni were for many years the pupils of Signor Enrico Rusconi, considered the most noted sculptor in Northern Italy.”

This article made such an impression on me that I knew I had some heavy research ahead. The only clues that were relevant to me were the name of the city, Cleveland, and the name of one of the sculptors, Monti. From researching my family genealogy, I learned that my great Uncle, Attilio Monti was the owner of A.D. Monti Granite Company in Cleveland. However, there were other Monti family members that were also stonemasons. Furthermore, at that time, Monti was a somewhat common name in the Little Italy section of Cleveland.

Armed with just this article and no other information, I contacted the Diocese of Youngstown. This first attempt came up empty. There were conflicting stories regarding the fate of the sculpture. Was it removed from its original location? Was it lost? These were questions I pondered in my head. There were no family members to ask so temporarily the research moved to the back burner.

However, this past February I discovered a shared DNA cousin through Ancestry.com. Was it serendipity that the match would be with the granddaughter of Attilio Monti? After a couple of pleasant email exchanges, I decided to take a risk and ask my burning question! I sent my newfound second-cousin a picture of the newspaper article I had found online. To both my surprise and delight, she responded to my email with a framed picture of the Last Supper that was hanging in her home. It was an exact match to the newspaper I had found! She further explained that as a young child, she accompanied her grandparents to Youngstown to view the Last Supper Sculpture at Sacred Heart Church, presently St. Angela Merci Parish. This discovery encouraged me to track down the location of the sculpture.

Over the years, my husband would rely on archivist assistance while writing two church histories. One contact that he used was an archivist at the Catholic Historical Research Center of the Archdiocese of Philadelphia. This archivist was able to find some valuable information on the Dedication of Sacred Heart Church in the Catholic Universe issue of December 13, 1912. It stated, “The main altar besides its masterful carving, has a representational of the Last Supper in high relief and showing the most artistic skill in execution.” Even though this excerpt did not include the names of the sculptors, at least I had the initial location of the sculpture.

Having this new information, I was encouraged to contact the Youngstown Diocese once again. This time, I was able to speak to the Chancellor and he explained the early history of parishes in the area. He told me that at that time, Sacred Heart Church, even though residing in Youngstown, was part of the Cleveland Diocese. In 1943, Youngstown became an independent diocese but, unfortunately, during the transition, many historical records were either lost or destroyed. My 1913 article helped bridge the knowledge gap.

My next contact in the Diocese of Youngstown was the pastor of St. Angela Merci Parish. According to the pastor, during the renovation of Sacred Heart Church, now St. Angela Merci, the “Last Supper” sculpture was moved from the main altar and now sits below the tabernacle which is now part of the Eucharistic space located in the basement. I now could breathe a sigh of relief knowing that the sculpture was safe.

The only thing missing was a picture of the “Last Supper” sculpture at the church. My last piece of evidence to complete the story. Due to the closing of churches because of the COVID-19 pandemic and other circumstances, a photo was delayed. However, with the help of a couple of people in the La Gazzetta Italiana community, the long sought-after photograph was finally secured and brought closure to my quest.