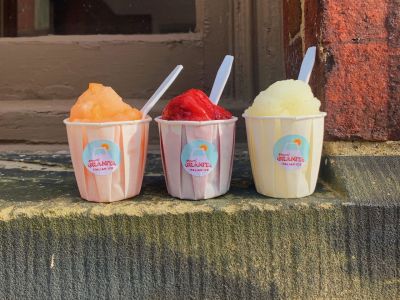 Weekends got a little sweeter for Cleveland’s Little Italy neighborhood this summer. A new food cart, Mount Granita, will serve up Italian ice in the neighborhood every weekend, Thursdays through Sundays, according to a press release.

The new business, stationed at 2024 Murray Hill Rd., will be open during good weather in the summer months, serving freshly made Italian ice. Its grand opening will take place on Thursday, June 4.

Owner Christopher Giancola said that the cart was inspired by Little Italy’s history, specifically Zammataro’s, a popular spot that was open in Little Italy for more than 40 years, according to The Plain Dealer Records.

“The business was inspired by stories told by my family, the Pinzones, who used to describe growing up in Little Italy after immigrating from Sicily in 1955. They would frequent a bakery called Zammataro’s at the corner of Murray Hill and ‘Piggy Street,' which was known throughout the neighborhood for having the best lemon ice -- and for only a nickel,” Giancola said in a press release. “Mount Granita aims to fill the void left behind by the nostalgic neighborhood markets of the past.”

The cart is open from 5-9 p.m. Thursdays through Sundays, and offers catering through its website too.

“I am proud to be investing back into this neighborhood to offer a taste of the past, and I am confident in the future prosperity of Cleveland’s Little Italy, which is widely beloved by so many,” Giancola said.

You can find more information about Mount Granita at mountgranita.com.