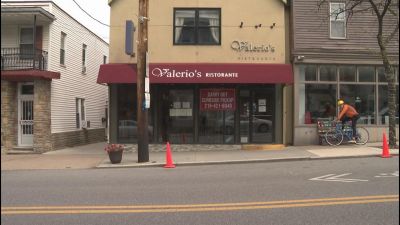 The cancellation of The Feast of the Assumption delivers third blow to the neighborhood.

most important money-making event of the year. “It’s been quite devastating to be honest with you,” said Bill Salerno, owner of La Pizzeria in Little Italy. “It’s a struggle. I wouldn’t say it’s dire or bad, but I’d say that people are struggling,” said Dominic Gogol, owner of the Tavern of Little Italy.

Businesses in the historic district have been dealt blow after blow recently, between the COVID-19 shutdown, weekends of unrest because of protests and the crushing news that the Feast of the Assumption was called off. “It’s a heavy hit for a lot of people,” said Gogol. Some owners don’t know how long they can sustain this new normal, and how many of them will survive this summer and beyond. “We are operating at about 25 to 40% of our potential and we had almost 2 weeks of constant unrest during the protesting which hurt us all very much, so this has been a constant struggle. Our summer is one-third of the way done and we do not have much to look forward to,” said Terry Tarantino, owner of La Dolce Vita.

The neighborhood boasts a lot of intimate, narrow dining rooms and patios, but that doesn’t allow for social distancing, so most places are down to about 50 percent capacity at best. “People say ‘Wow, business is back.' Truth of the matter is, they don’t realize you’re missing 12-15 tables,” said Guarinos owner, Scott Phillips Sr. Phillips says “busy” is relative, and they’re doing what they need to make the customer comfortable. “The dollars aren’t there, the customers aren’t there. But we are making it work. That’s why we have to work smarter internally,” he said.

La Pizzeria on Murray Hill had just completed a new dining room when the shutdown order was issued, but it’s sitting empty. They’re making do with carry out, but they rely a lot on the foot traffic from the Case Western Reserve University crowd and that is gone. Salerno says he understands why The Feast was cancelled but it’s devastating. “We really were hoping to get those revenues to help recoup all the income that we have lost. That’s huge, all of us operators we really depend on The Feast, especially in the winter months when it’s slower. You have that little bit of a cushion there. Now it’s no longer there,” he said. “It probably makes up 30-40 percent of your winter bill pay, if not more. Plus, the church is going to take a huge hit. It’s our foundation down here,” said Gogol.

Gogol is working on collaborations with other business owners, like the Meatball Crawl he organized last year, to help lift up the entire neighborhood still stinging from all of this bad news. The Feast usually draws hundreds of thousands over four days. And two more large events, the Taste of Little Italy and the Columbus Day Parade usually draw thousands each, both of which help businesses stay open during the winter, but they’re not counting on those this year. “I don’t know how long this can go on for our restaurant or any of the other restaurants,” said Phillips.

Holy Rosary Church will still celebrate the Assumption on August 15 and, if possible, hold a traditional procession on that day. The church is waiting to make a final decision on that.

This article first appeared on