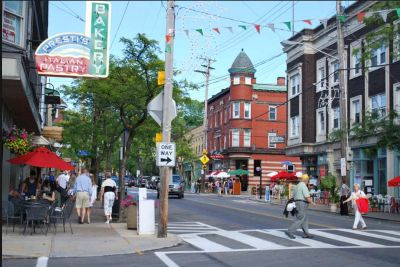 Little Italy, one of five major Italian settlements in Cleveland, is located from E. 119th to E. 126th streets on Murray Hill and Mayfield roads. Established in 1885, this physically well-protected and well-defined ethnic enclave is bordered by the forested bluff of Lake View Cemetery to the north and east and the Regional Transit Authority’s Windermere-Airport Rapid Transit line and the Case Western Reserve University campus to the west.

Often referred to as “Murray Hill” because of the street by that name in the center of the neighborhood, the Italian hill town has a reputation as a closed community whose assets are historic and original. By the late 1890s, many Italian immigrants had settled in the Mayfield-Murray Hill area and worked in the nearby marbleworks, one of which, the Lakeview Marble Works, was founded by skilled stonemason Joseph Carabelli.

In 1911, it was estimated that 96 percent of the inhabitants were Italian-born and another 2 percent were of Italian parents. Many of these Italians were Neapolitan and were engaged in skilled lacework, garment-making and the embroidery trades. The largest group came from the towns of Ripamolisano, Madrice and San Giovanni in Galdo, Campobasso Province in the Abruzzi region.

Today, Little Italy is one of the city of Cleveland neighborhoods that attract thousands of visitors each year to experience its historical charm and frequent its many restaurants, shops and galleries. Little Italy is a trendy, upscale center for art, dining and gracious living in an old world neighborhood. Though many of the residents are not of Italian descent, the organizations of Little Italy actively work to promote their Italian Heritage and protect the cultural identity that so many have a connection to.

In the community where the macaroni machine was invented in 1906, visitors will find many attractions such as Holy Rosary Catholic Church, Cleveland Montessori School, and numerous award-winning restaurants, artists’ studios and shops.

In 1993, the community dedicated Tony Brush Park, named for champion boxer and Little Italy resident Anthony Brescia, at Mayfield and Random roads. In 2008, this city park was given a $900,000 transformation to better serve the Neighborhood.

A visit to Little Italy, one of Cleveland’s most enduring neighborhood enclaves, will stay with you forever.

Little Italy welcomes you to sit amongst locals at the biggest community table in the city, hosting events that bring thousands of people to the neighborhood. Come and experience The Feast of the Assumption, Taste of Little Italy, the Columbus Day Parade, the annual Bocce Tournament, and incredible Alfresco Summer Nights where patio dining is like no other and you just might hear an impromptu opera!

Learn more about Little Italy, with a stop in the Visitors Center, on the corner of Mayfield and Random roads and keep up with events on universitycircle.org/visit/little-italy and littleitalycle.com.

Tweet
More in this category: « LGI's calendar: things to do Sarah Triscaro: 100-Years-Young »