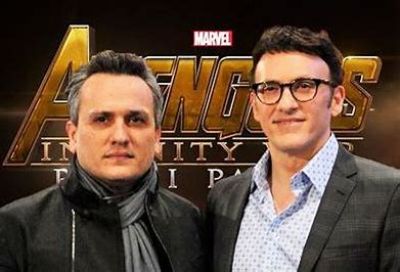 The Cleveland Pops Orchestra is pleased to honor the Russo Brothers at the 2019 G-Clef Gala on Saturday, Oct. 19. Cleveland Pops will pay tribute to Joseph and Anthony Russo for their contributions to the arts. The event, beginning at 6:00 p.m., will take place at The Hilton Cleveland Downtown, located at 100 East Lakeside Avenue.

The highly anticipated G-Clef Gala will start with a V.I.P. Champagne Reception sponsored by Glenmede. Supporters of Cleveland Pops will have the opportunity for photos and to meet and greet the Brothers. Cocktails, Hors D’oeuvres, Silent Auction and dinner ensues, followed by entertainment and dancing supplied by Cleveland Pops Orchestra and conductor Carl Topilow.

Readers of La Gazzetta Italiana are cordially invited to attend the Cleveland Pops’ G-Clef Gala, to enjoy the festivities and the entertainment and to meet The Russo Brothers. Make your reservations by going online to www.clevelandpops.com.

Joe and Anthony Russo are the artists and innovators of some of the world’s most successful and iconic blockbuster films and television shows. The Russo Brothers directed the record-breaking hit:  Avengers: Infinity War. The film had the best opening weekend of any movie in history with over $640 million worldwide in the first weekend. Avengers: Infinity War set box-office records crossing the $2 billion mark in mid-June. They are the creative minds behind critically acclaimed television shows including Arrested Development (Emmy Award for Outstanding Directing for a Comedy Series), Community, and Happy Endings, directing their pilots as well as many signature episodes. The brothers helped established these shows on both stylistic and storytelling levels that continue to be cult classics with ever growing audiences.

In early 2018, the Russo Brothers announced their new studio, AGBO, an artists-led collective focusing on creating global content for film, television and digital platforms. Headquartered in downtown Los Angeles, AGBO aims to nurture talent and create best-in-class family and prestige content. In addition to their film and television successes, the Russos are co-founders of Bullitt, a creative studio centered on the creation of brand-integrated entertainment and advertising content. Joe’s most recent venture is the opening of his downtown-LA restaurant, Simone, with James Beard-winning chef Jessica Largey.

The versatile Filmmaker’s unique vision connects deeply with global audiences, placing them among the top-grossing directors of all time. Other notable directing credits include Captain America: Civil War, Captain America, The Winter Soldier, and the highly anticipated Avengers: Endgame. Captain America: The Winter Soldier broke the opening record for an April release and went on to gross more than $713 million worldwide. Following that, Captain America: Civil War not only enjoyed the 5th highest weekend gross in domestic box-office history, but also had the highest worldwide gross of 2016. The Russos directed Welcome to Collinwood, produced by George Clooney and Steven Soderbergh. The film was selected from a competitive pool for screening in the independent section of Cannes Film Festival Directors’ Fortnight at the 55th Cannes Film Festival.

The Brothers’ constant efforts to perpetuate both the medium of motion pictures and the culture of filmmaking artists, allows them to find young and upcoming storytelling voices. They strongly believe in giving back to the film and Italian American communities which speaks to the quality of their nature and the sincerity of their heartfelt passion.

Joe and Anthony take any and every opportunity to recruit filmmaking professionals who they believe deserve acceptance into the Director’s Guild, and beyond basic sponsorship, take it upon themselves to personally mentor each individual to prepare them for a higher tier of filmmaking and directing. They diligently use the set of their blockbuster films as a platform to educate the next generation of filmmakers by regularly hosting week-long internships. They also founded a film forum in conjunction with The National Italian American Foundation, which lends a microphone to any aspiring filmmaker interested in telling a story unique to the Italian American experience. This is cornerstone example of how The Brothers both pay homage to their heritage and preserve the voice of the culture in which they take such pride.

Between their proven success at the box office, tremendous impact on the celebrated superhero genre, and distinct flavor of storytelling, Joe and Anthony have established themselves as distinct voices in the arena of groundbreaking film and television.