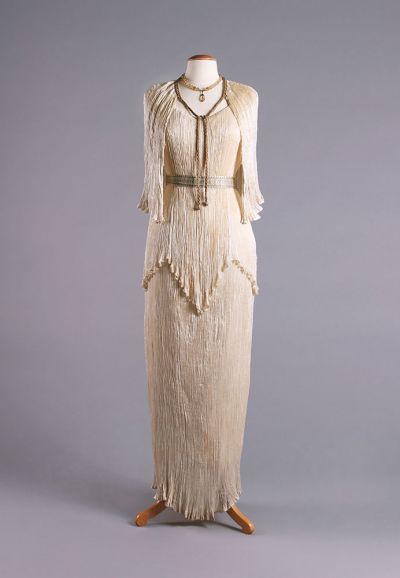 An exhibit highlighting the renowned costume and textile collection of the Western Reserve Historical Society is currently on display in the Chisholm Halle Costume Wing of the Cleveland History Center in University Circle. “Wow Factor: 150 Years of Collecting Bold Clothes,” presented by PNC features not only amazingly beautiful and striking garments, but also the stories of the individuals who wore them and the designers who made them.

Patricia Edmonson, Museum Advisory Council Curator of Costume and Textiles, said the idea for “Wow Factor” came to her as she was working in costume storage. When Patty started in the position in January 2016, she spent a lot of time studying the collection. Each time Patty entered storage, a spectacular piece would catch her eye and she would think, “Wow, we need to display this!”

The WRHS Costume and Textile Collection is extensive, containing garments dating back to the 1750s. As you can imagine, Patty found many pieces that “wowed” her. To narrow her selections, she decided to include primarily those with a connection to the Cleveland area. The second criteria for selection was that the garment told a story about the wearer, designer and time period in which they were created.

A number of pieces in the exhibit have an Italian connection; including one worn by Elizabeth Ring Ireland Mather (1891-1957). Elizabeth was the wife of local Industrialist William Gwinn Mather. Elizabeth loved and admired the art and culture of Italy. She decorated her home in Bratenahl, called Gwinn, with many elements of Italian style and culture, including sculptures modeled after those owned by the Medici. Her affection for Italy translated to her dress as well.

Mariano Fortuny, a designer living and working in Venice, was known for the unique pleating he incorporated into his garments. In the 1920s and 1930s, his clothing designs were highly sought after and often imitated. In “Wow Factor,” you can see the Fortuny dress Elizabeth Mather wore in the 1930s. It is a finely pleated silk dress inspired by Grecian forms called Peplos that could be worn without the restrictive undergarments many women’s fashions had required for decades prior. The silk added a touch of comfort and lightness to the garment, reflecting another change in women’s clothing.

“Wow Factor” also contains a number of unexpected surprises, like LeBron James’ shoes, a tie worn by a character in the HBO show “Boardwalk Empire,” and jewelry from a local designer who worked on “The Hunger Games” films. This exhibit is a must-see that goes beyond the expected. “Wow Factor: 150 Years of Collecting Bold Clothes” will be on display at the Cleveland History Center through April 2018. For more information, visit www.wrhs.org or call 216-721-5722.