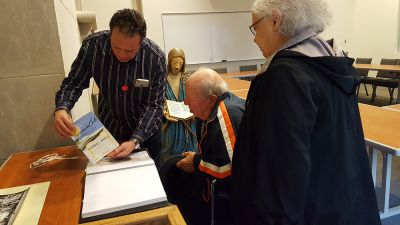 Immigration is the first chapter in the history of Italians in America. Immigration stories answer important questions like why did a person or family leave Italy, how did they travel and where did they settle when they arrived in the U.S. They are a vital component of the WRHS Italian American Collection.

Recently added to the WRHS Italian American Collection is an album chronicling the immigration story of the Fragapane, Calderaro and Lavacca families who immigrated to Cleveland from Alcara Li Fusi, Sicily, in 1955. The album contains all of the documents pertinent to the immigration process including birth and marriage certificates, steamship tickets, ship manifests, passports, green cards, and naturalization papers. It also contains advertising pamphlets for the steamships and some other important documents like lineages and military discharge papers.

The Fragapane, Calderaro and Lavacca families’ papers were carefully organized and preserved through a labor of love by Salvatore Fragapane. Sal’s parents, Sam and Felicia, immigrated with their siblings and cousins and inspired Sal to create the album. Sal said, “I had always wanted to catalog the multiple voyages that all of my parents, grandparents, aunts, and uncles completed to make their way to the U.S. After visiting my parents’ hometown of Alcara Li Fusi in Sicily for the first time with my Dad in 2006, I had all of the pride and motivation I needed to complete the project.”

Assembling the album was quite the time-consuming process. Besides gathering documents from family, Sal spent time researching at the U.S. Customs and Immigration Office and the National Archives. He looked through over 8,200 microfiche reels to find the steamship manifests. All the time and effort was affirmed when he presented each family member with a copy of the album on Christmas Eve of 2006. The album was received with tears of joy and love.

Sal became acquainted with the WRHS Italian American Collection through attending some events highlighting the collection at the Cleveland History Center. He thought it important that his family’s story become a part of the collection and he donated a copy of the album with his family’s blessing.

Sal then arranged a special visit to the Cleveland History Center for his family to see their album displayed with a number of other items donated by members of the Societa Alcarese di San Nicolo Politi of Cleveland. The Fragapane Immigration Album combined with these other items nicely represents the history of emigrants from Alcara Li Fusi, Sicily.