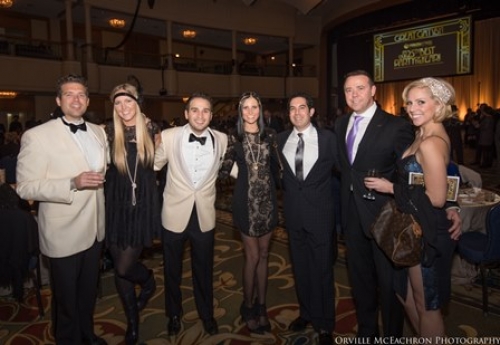 Great Gatsby, what a night! On Friday, December 5, over 650 party-goers gathered at the Renaissance to celebrate the season with the 25th Annual Best Party of the Year presented by Jay Lucarelli and his Minute Men Staffing services. Over $130,000 was raised to help fight hunger in Cuyahoga County.

The late Nick Orlando, Sr. of Orlando Baking Company was introduced to the Hunger Network program in 1989. In that first year, a group representing the Hunger Network promoted a party in which guests were asked to bring a bag of groceries. Nick Orlando, Sr. was among the 200 who attended the event and decided he would become an active participant and, more so, a major sponsor. The following year, he asked local business friends to join in the party promotion. The early partakers included Joseph Miceli of Miceli Dairy Products, Joseph Sidari of Sidari Italian Foods and the late Samuel Lucarelli of Minute Men. More than 1,000 guests paid to attend the party. These businesses remain active in the program.