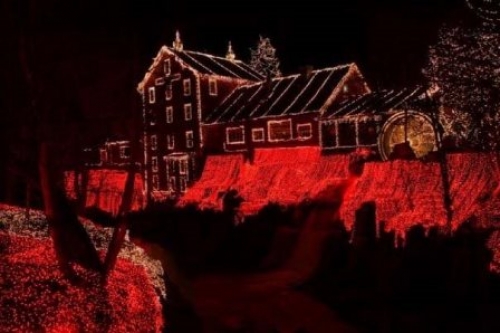 It's not uncommon for wealthy Texans to have tax write-offs. One such Texan owned a flour mill in Clifton, Ohio. This working mill is 30 miles east of Dayton and about 40 miles southwest of Columbus. Living near the flour mill is Anthony Satariano who traces his heritage to Termini, Sicily. He's always been fascinated with mills, even trying to purchase one in Pennsylvania and another in Virginia, but both deals fell through. When the Clifton Mill, virtually across the street from his home, became available in 1987, Satariano bought the property.

Each Christmas the Satariano family decorated their home, compelling Anthony to think, why not light up the mill? He and his father, Anthony Sr., installed lights for the family's personal pleasure, however passersby were so caught up with the look, Satariano decided to increase the number of lights to 100,000, but that was just the tip of the iceberg.

This holiday spectacle continued to attract more and more attention. So much so that Satariano continued to add more lights over the years, and the property became a Christmas lighting wonderland. Today, Clifton Mill boasts one of the most spectacular Christmas lighting displays in the country. Each year, the Satariano's hire six to ten men who work three months to install the lights, which presently number 3.8 million. The lighting bill is about $2,200 per week.

The lights illuminate the mill, gorge, riverbanks, trees, bridges, and a 100 foot waterfall spotlighted with twinkling lights. The flip of one switch turns all the lights on at once, transforming nighttime into an amazing holiday winter display which includes a Miniature Village, a Santa Claus Museum, dazzling lights and a glittering covered bridge. Every night until the night before Christmas Eve, Santa's Workshop is busy as a bee with Santa hard at work. Every 15 minutes or so, he checks his list and goes up a chimney to load his sleigh led by 8 life-like reindeer.

Every hour on the hour, all 3.8 million lights go out, leaving patrons in total darkness. As a hush falls over, music softly begins to play a medley of traditional Christmas songs, and lights on the covered bridge begin to twinkle on and off. As the music builds, more twinkling lights illuminate the covered bridge and nearby pseudo trees sway round and round in magnificent colors. During the finale, the music booms through Clifton Gorge and everyone is enthralled at the changing picturesque scenery. When the music ends, the bridge lights all go out, once again leaving guests in total darkness. Then, before spectators can catch their breath, 3.8 millions lights, all at once, come on again. "It's an amazing rush for our customers," said Anthony Jr.

Another major attraction is the outdoor miniature village that represents and recreates the town of Clifton's historic buildings. The scene includes a 1950s diner, a Main Avenue parade and four trains that go around the village and across a covered bridge over mill creek. On the outskirts of this recreated village is a drive-in movie theatre that shows old film clips, a frozen pond with ice skaters, a football game in progress, and a country fair with moving bumper cars and a Ferris wheel.

Also revealed is a Santa Claus museum that houses the private collection of the Satariano family, accumulated over nearly 40 years. There are more than 3,000 models of Santa Claus, some dating back to 1850. Some are mechanical, some are nostalgic toys from the 50s, 60s, and70s and some are weird, elegant, or rustic, but all different and interesting. Also on display is a gift shop full of unique gifts and world-class hot chocolate. The lighting display begins the day after Thanksgiving and closes on the evening of New Year's Day. Admission price is $10 for everyone over seven-years old.