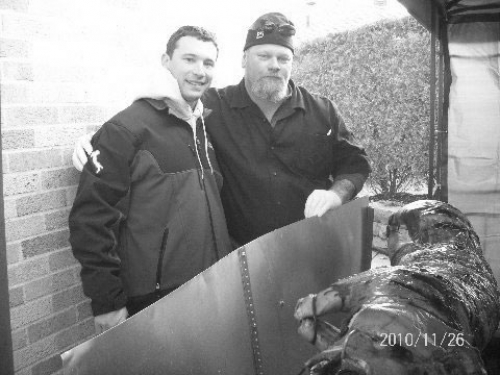 Neither rain, nor sleet, nor icy cold kept 84 bocce players proud of their Italian heritage from courageous roll-offs in the backyard of the Highland Heights home of Dominic and Shelly Piunno.

The Hillcrest Bocce Club Tournament has attained traditional status as Italians from the Greater Cleveland area signed on as entries beginning in late September. Bocce Chairman Dominic Piunno predicts that next year's playoffs at the Italian American Club in Wickliffe will attract more teams.

Valet service in a Cleveland Browns mobile van accommodated players and guests whose cars lined up nearby streets as more than 200 people converged on the festive backyard of Piunno's home where landscaper Joe Di Padova built a 66' long, 12' wide lighted permanent court.

There was more than just fun and games as the Hillcrest Bocce Club hosted a pig roast feast with all of the trimmings. Chef Donny Agresta of Mayfield Heights did the honors and Michael Rini made sure everyone indulged in his one-of-a-kind clam chowder. Piunno's wife, Shelly, decked the tables with cavatelli, pasta Bolognese, sausage and peppers, pizza from Eugene Ciasullo's Giuseppe's in Richmond Heights and beef brisket to complement her escarole and avocado salad. Trays of Italian favorites including cannoli and tiramisu were not overlooked, nor was the homemade bread prepared by Dr. Henry Fioritto and baked by his son, Michael. Naturally, there were shouts of cin-cin with the homemade vino.

The annual event marks a throwback to the old days when family and friends got together for backyard games, fun and food.

Tweet
More in this category: « Off to the Murray Hill Market We Will Go! Our Lady of Mount Carmel Church-East: The Fire of June 13, 1949 »