The Dante 700 Project by Timothy Schmalz 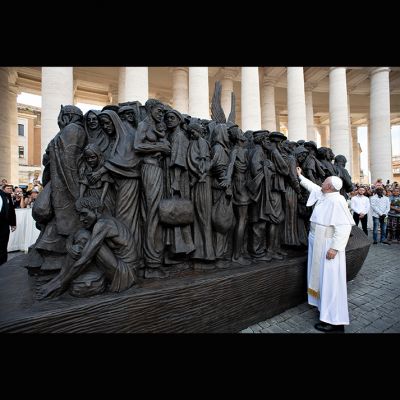 For over 25 years, Canadian sculptor Timothy Schmalz has been sculpting large scale sculptures. He is a figurative artist with his pieces installed worldwide. Some of his most reputed pieces are installed in historical churches in Rome and at the Vatican. Timothy describes his most important work as visual translations of the Bible. Although most of his work is based upon a spiritual theme, he also creates large, complex public sculptures in bronze. Some of these include monuments that honor veterans and firefighters. Timothy strives to create epic artwork that connects with viewers through design and details that not only touch the viewer on an emotional level, but also allow them to feel somewhat a ‘part’ of the piece.

“I am devoted to creating artwork that glorifies Christ. The reason for this devotion, apart from my Christian beliefs, is that an artist needs an epic subject to create epic art,” Timothy states. “I describe my sculptures as being visual prayers. When I create a three-dimensional sculpture in bronze, I am quite aware that it will last longer than myself. I realize I am between two things that are much more durable than myself: Christianity and bronze metal. It is between these that I have developed a subtle appreciation for what Saint Francis meant by ‘instrument.’”

In September 2019, Timothy Schmalz’s “Angels Unawares,” a life-size bronze sculpture commemorating the 105th World Day of Migrants and Refugees, was installed in St. Peter’s Square in Rome. Pope Francis celebrated a special Mass for the occasion.

Timothy is currently working on a new project to honor the 700th anniversary of Dante Alighieri in 2021. “I believe Dante is one of the greatest writers of all time. So, I thought I would do what has never been done before. I think this is an amazing opportunity to celebrate not only Dante, but Italian and European culture.” He plans to sculpt each of Dante’s 300 cantos. The “Dante 700” sculpture project will memorialize this significant anniversary with sculptures of each of the 100 cantos in the Divine Comedy. Very few artists ever represent more than the “Inferno” in their paintings and sculptures. This is a rare project that will show individual sculptures of all the cantos, including “Purgatory” and “Paradise.”

The project will include the cantos and a principal sculpture of Dante. Installed together and cast in bronze, the work will be dynamically represented in order to inspire people to actually read Dante. This sculpture project will also be used to create a new illustrated book of Dante in collaboration with a new translation, which will be finished for the anniversary year in 2021.