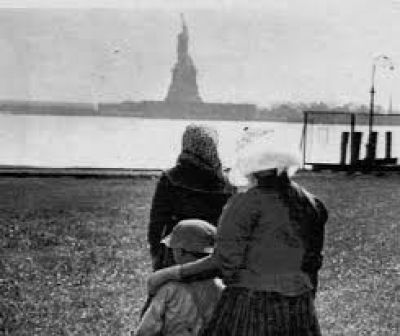 The perilous journey to America in the late 1800s and the early 20th century was extremely difficult for Italian immigrant families. Worn out and exhausted, most toting an old foot locker and a couple of bags, they hoped for an opportunity to economically improve their family situations in America. Most arrived in stages, following Papa who usually ventured across the Atlantic first to establish citizenship and secure full-time employment.
“When the Italian began arriving in New York City in large around 1880, they faced fierce competition from the Irish who resented their working for less money and longer hours. And although they shared the same Catholic faith, Italians were viewed as superstitious because of their devotion to saints, which was expressed in the staging of elaborate feasts,” writes Haydee Camacho in “Reflections of Irish and Italian Immigration, Animosity, and Eventual Understanding.” “Irish pastors tried to accommodate their growing Italian communities by offering these Italian immigrants services in the basement of their churches, but pride would not have it. The stalemate led to the building of churches to serve Italians and other new immigrant groups, not only in New York but other major cities in America’s mid and northeastern, major cities.”
Between 1876 and 1930, most of the five million Italian immigrants came to the U.S. from southern Italy as farm laborers and unskilled workers known as cantadini. Most of the newly-arrived were confused and lost in America, but earlier immigrants assisted them by introducing the Italians to the padrone, a boss and middleman between the immigrants and the American employers. In “When America Barred Italians,” Helene Stapinski wrote, “So our desperate great- and great-great-grandparents came in droves from Italy spurred by the Industrial barons in need of cheap labor who welcomed them with open arms to America. Often dangerous jobs no one else wanted awaited them. Some, like my relatives, came here illegally, under false names or as stowaways. On one ship alone, 200 stowaways were found.”
“The padrone was an immigrant from Italy who had been living in America for a while. He was useful for immigrants because he provided lodging, handled savings, and found work for the immigrants (acting as a translator often times out of necessity). All in all, he helped American employers by organizing a supply of labor,” accurately depicts Alexandra Molnar in “From Europe to America: Immigration Through Family Ties.” Molnar points out that “prejudices were especially aimed at Southern Italians who became the scabs during strikes in construction, railroad, mining, long shoring, and industry. Often times these Southern Italian workers were called derogatory names such as ‘guineas’ or ‘dagoes’ and were the only workers to work alongside black people.”
Before a U.S. congressional commission, a politician from Calabria testified that emigration from the South had gone too far, adding that he was sorry Columbus had ever discovered America. In fact, the U.S. government used the published views of native Italian, Cesare Lombroso, a 19th-century Northern Italian doctor, to stop his starving Italian countrymen and women from immigrating to America. “Lombroso, a traitor to his own Italian people, was convinced that there was such a thing as a ‘natural born criminal.’ He measured the heads and body parts of thousands of fellow Italians – particularly Southerners – and came with a description that matched the description of most of the immigrants coming over at the time: short, dark, hairy, big noses, and ears,” writes Stapinski. “Lambroso branded the Southern Italians savages and rapists, blaming them for the crime that was on the rise in the United States.” The U.S. Immigration Commission concluded in the infamous Dillingham report, “Certain kinds of criminality are inherent in the Italian race. In the popular mind, crimes of personal violence, robbery, blackmail and extortion are peculiar to the people of Italy.”
The Immigration Act of 1924 barred most Italians from coming into the country, causing immigration from Italy to fall 90 percent, even though the vast majority of those coming to America were good, honest-working people and not criminals. There was also growing anti-immigration sentiment that posited the idea that Italians and eastern Europeans were morally unfit to be Americans. Of course, the same argument was made of the Irish. Eventually, this attitude would result in a 1924 federal immigration law that blocked Italians and southern and eastern Europeans from coming to America.
Italian immigrants were chasing after the “American Dream” and  the “gold in the streets” they had heard so much of and hoped for when they were growing up and working on the farmlands and vineyards in sunny Italy. Like other immigrant groups, they had sons who honorably served their country in WWII. Hall of famers Rocky Marciano, Lawrence “Yogi” Berra and Joe DiMaggio, all first-generation Italian Americans, served in the war. These men and many other Italian immigrants persevered through the prejudice and “second-class” treatment and achieved the “American Dream.”

Tweet
More in this category: « From the Italian American Press: "Coal War in the Mahoning Valley" The Dante 700 Project by Timothy Schmalz »