A Lost World of Sound Comes Back to Life 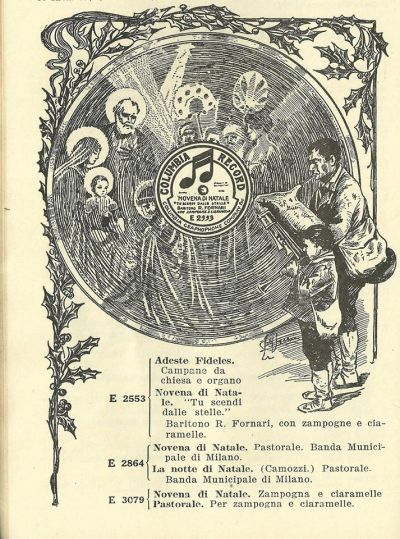 A 1917 Columbia Records Italian catalog of two bagpiping shepherds. This particular record was very popular among Italian immigrants. It was a Christmas record, “La Novena di Natale.” The piper plays “Tu Scendi Dalle Stelle.” This is significant because the bagpipers were traditionally shepherds. Piping served the purpose of keeping them occupied while they were in the pasture. It also comforted the sheep or goats and scared away the wolves. The angel who announced the birth of Christ first appeared to the shepherds, some of the poorest citizens who are greatly revered in Italian culture. The advertisement was really pulling at the heartstrings of the homesick immigrant.

When we think of our Italian heritage, many of us find our first thoughts centered on our food. Then we may think of old family photographs of our immigrant relatives settling into their new country. Certain smells may trigger memories – our grandmother's kitchen or our grandfather's aftershave. As a musician and music historian, I often wondered what the world of my ancestors sounded like? This eventually led me to begin collecting old 78-rpm records of Italian musicians.

One of the amazing things about these records, which took me a long time to realize, is that they were made here in the U.S. and not in Italy. Largely, we Italian Americans are from peasant stock. It didn’t occur to the Italian recording industry that there might be some value in the music of our people. Their focus was on opera, classical and art music. In the U.S., though, where there was plenty of work for Italians and where they were making a better living, record companies set out to get whatever bits of disposable income they could from immigrants.

From 1905 until the 1930s, thousands of recordings were made for Italian immigrants; the variety is staggering. Some of these records appealed to a longing for home and to capturing traditions from Italy: acapella lullabies, fruit vendors hawking their wares, bagpiping shepherds or zampognari, who would come to town during Christmastime to play from door to door for donations of food or money. Other records relayed news events: Italy's war with Austria, the achievements of Italian aviators, the Sacco and Vanzetti trial, and the rise of Benito Mussolini. The studios also recorded songs made about the trials and tribulations of the immigrants in their new home, for example, the litany of terrible jobs they had to work, nostalgia for mother (Senza Mamma) and the foibles of an Italian man with an Irish wife.

While these records sold fairly well to the Italians who immigrated, a combination of things happened to cease production. First, the Great Depression took a tremendous toll on the recording industry as a whole. Second, the children of the immigrants weren't as interested in Italian culture and music. They were Americans whose interests laid in the popular music of the day, the big bands and jazz. The old records were tossed out or tucked away on a shelf in an attic or in the basement.

These recordings have largely been ignored by collectors and scholars. For that reason, I started putting together a collection of them 12 years ago, initially for my own interest, but eventually because I realized they were in danger of being lost forever. While archives exist for the music of other ethnic groups, Jewish music at the University of Wisconsin, Mexican Music at UCLA and African American music at the University of Mississippi, there is no such archive for Italian records. It is important that these recordings be preserved so that future generations of Italian Americans and musicians and scholars will know what our ancestors’ world sounded like.

Todd Cambio is a musician and guitar builder in Madison WI. He has produced a 2 CD compilation of Italian records from his collection entitled “Paese Mio Bello.”  If you would like to acquire a copy of the compilation, have questions or comments, or if you have some old records looking for a home, he can be reached at This email address is being protected from spambots. You need JavaScript enabled to view it..

Tweet
More in this category: « Assisi's Christmas of "Il Poverello" A Liturgical Pax from Renaissance Florence »