An Ivory from Amalfi 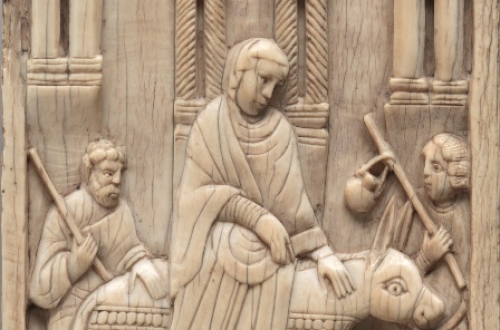 An Ivory from Amalfi

A popular tourist destination for travelers to Italy since the 19th century is the celebrated Amalfi coast of southern Italy. It was much beloved by the British upper class and aristocracy who flocked there in the 1920s and 30s. So unique and visually compelling is this stretch of coastline on the Sorrentine Penninsula that in 1997 it was listed as a UNESCO World Heritage Site and a cultural landscape. It is memorable to all who see it. Scenic mountains meet the azure sea with colorful terraced houses and gardens cascading down to dramatic cliffs and the water's edge. The region's local products include the cultivation of lemons and the production of the much loved Limoncello liqueur. The region is also noted for its colorful handmade ceramics. The fabled route lay between Positano and Amalfi which, once seen, is never forgotten.

In the Middle Ages, the town of Amalfi was equally inviting to Byzantines, Arabs and Normans. It was the capital of the maritime republic known as the Duchy of Amalfi, an important trading power in the Mediterranean between 839 and around 1200. Maritime trade with Byzantium and the Islamic world brought prosperity to Amalfi and fame for its flourishing schools of law and mathematics. A grand focus of local pride was the Cathedral of Amalfi, first constructed in the ninth century with later additions. A basilica in the Arab-Normal Romanesque style was built next to the original church during the 11th century. The remains of St. Andrew the Apostle were reportedly brought here from Constantinople during the Fourth Crusade. In 1208, a new crypt was completed to house the apostle's holy relics.

In the Cleveland Museum of Art, a small ivory plaque dating to the 12th century provides striking connections with the Cathedral of Amalfi. Measuring about 6.5 inches in height, our ivory depicts the Journey to Bethlehem, an episode prior to the birth of Christ. Here, the Virgin Mary, Joseph and one of his sons from a previous wife are shown on their way to Bethlehem to be registered following the decree of Emperor Augustus. This beautiful ivory combines the brief account in the Gospel of Luke (2:1-5) with a more elaborate rendition of the same story in the Apocryphal Infancy Gospel of James (17:2). This intimate scene is set in front of an architectural background which blends Byzantine and Islamic architectural motifs. The building represented may well have been Amalfi Cathedral, which the ivory carver would have known well as it dominates the town.

Mary is shown seated sidesaddle on the donkey, while the smaller figures of Joseph and his son walk in front of and behind the animal. The Virgin's importance, as the mother of God, is emphasized by her larger size and central position. The Cleveland ivory was produced by a workshop in or near the city of Amalfi, probably during the early 1100s. Ivory production in the city had been continuous since the sixth century.

Elephant ivory has long been a rare and treasured material for carving. Ivory was a favorite material of the ancient civilizations of the Mediterranean, and its popularity continued in Roman art and in the art of Byzantium. From these civilizations, medieval Italians inherited a love for the material and the skills for carving it. Ivory remained popular with artists and patrons alike during the Middle Ages for its creamy color, fine texture and wonderful sheen, mirroring the monumentality of marble, but in small size. All elephant ivory was imported from Africa making it an expensive commodity which was available as a deluxe material to wealthy clients whether ecclesiastical or secular. It was very much sought after by those who wished to project images of wealth and status.

In the early medieval west, carved ivory plaques were used to decorate book covers, reliquary caskets, and portable altars. Crosses and croziers were also sometimes made of ivory if a church was wealthy enough to procure the material and find artists skilled in the techniques of carving it. So desirable was ivory during the Middle Ages, that it was ranked with gold, rock crystal and gemstones as an opulent material reserved for the finest art works. Well-to-do aristocrats used ivory for household items like combs or mirror cases, but also private devotional shrines called diptychs. Ivory was used across Europe, but as a commodity it was scarce in the north before 1200. Before this time, northern European artists were forced to use the arctic walrus tusk, a less desirable material, for ivory carving. Italian artists and their patrons, on the other hand, had greater access to elephant ivory. Art historians are aware of the continuing activity of ivory carvers in medieval Amalfi from about 1050 to 1200, suggesting that the town was a major center for this craft in that period.

A very large group of ivory plaques are preserved in the Museo del Duomo in nearby Salerno, a few miles from Amalfi. This series of 40 figurative plaques (originally there were more) represents cycles of stories from the Old and New Testaments including the Creation, Moses Receiving the Law, and the Life of Christ from the Incarnation to the Pentecost. Elements of these scenes have been shown to derive from the art of Byzantium in the Eastern Mediterranean. This is not surprising given that Amalfi had important trading ties with Constantinople. These ivories, though carved in the Amalfi workshops, are known today as the "Salerno Ivories" and have been dated by art historians to about 1084. It is thought that they were used either to decorate a bishop's throne, an altar frontal, or perhaps a pair of sanctuary doors at Salerno Cathedral.

The Cleveland Museum's ivory plaque showing the Journey to Bethlehem appears to be slightly later in date to the Salerno ivories, perhaps 1120-40. The importance of this plaque lay in its quality and its correlation to the Salerno ivories. The subject matter, composition, dimensions, and other attributes further reveal that the Cleveland ivory was inspired by two earlier plaques representing the Journey to Bethlehem and Flight into Egypt, now preserved in Salerno. Like the group of plaques in Salerno, the Cleveland ivory may well have been part of a piece of liturgical furniture such as a bishop's throne, an altar frontal, or a sanctuary door, but intended for the Cathedral of Amalfi. It may be seen in the museum's medieval luxury arts gallery bringing the viewer in proximity of the town of Amalfi at the apogee of its wealth and artistic success.

Plaque: The Journey to Bethlehem