Italian Americans and World War I 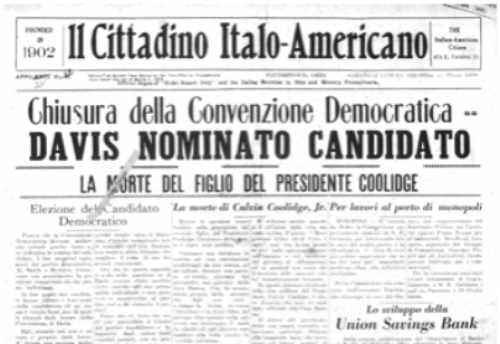 Though postwar U.S.A. experienced a depression that lasted until 1921, the severe economic and social upheavals that hit Italy in the wake of WWI had little parallel in the U.S. In fact, the period of the 1920s was one of general prosperity -the Roaring Twenties- that aided greatly in the Americanization of immigrant communities.

With citizenship and a stable employment in their grasp, many in the Italian enclaves began putting down permanent roots in U.S. soil. The era saw growth of Italian owned homes, construction companies and businesses. Industrial production hummed and the nation's workers, immigrants included, acquired work at ever increasing wages. The new generation of children born of immigrant parents took advantage of public schooling, where they learned the English language along with valuable skills and civic values that would enable them to integrate more fully into American society. In 1920, American women won the right to vote, a measure that provided the groundwork for their political independence. Women in Italy would not gain suffrage until 1946. By the time the WWI generation matured, Italian American young people were swinging to the music of Glen Miller and dancing to the jazz rhythms of Cab Calloway, just like the rest of the nation's youth.

But negative stereotypes of Italians remained and even increased, in part fueled by the criminal activities of mobsters such as Al Capone, who grabbed headlines during the Federal government's ill-fated attempt to ban liquor. In this same period, there appeared a new civic spirit in the Italian nationality neighborhoods. This was a self-conscious effort to adopt more mainstream cultural habits. The settlement houses of the era helped Italians and other immigrants by providing classes in English and in American cooking and dressmaking. There, they joined sports teams where they learned the U.S. ballgames of baseball, basketball and football. Some opted to change their Italian given and last names. Pasquale became "Patrick," Salvatore "Samuel," and Filomena "Florence;" while the surname Di Michele became DeMichael.

Tellingly, in Ohio, the Italian response to discrimination illustrates the extent to which this community matured politically in the postwar period. In the early years of the 1920s, a revived Ku Klux Klan infiltrated city governments and police forces in the North. There, Catholics found themselves targets because of their allegiance to the Pope and supposed lack of Protestant virtues. Adding to this suspicion of Catholics was the presence of foreigners among them. Italians received additional hostility because of their poverty, strong group solidarity, the attraction of some to socialism and anarchism, and for their practice of defying Prohibition by bootlegging wine and liquor. Between 1919 and 1920, in a series of raids on so-called disloyal activists in ethnic communities, Attorney General Palmer arrested over 10,000 and from this number deported 556 resident aliens, including a number of Italians. Cartoons in the nation's newspapers depicted Italians as dark skinned, politically radical and criminally minded. Indeed, to the prejudiced organization of the KKK and many others, Italy's sons and daughters transplanted on U.S. soil constituted an undesirable ethnic group that posed a serious threat to America's Protestant heritage.

In the fall of 1924, strife between the Klan and groups of Italians and Irish found violent expression in Niles, OH. With a large Italian population, a Klan-endorsed mayor governed the city. Despite urgent appeals by religious and civic groups, Mayor Kistler refused to revoke the Klan's parade permit for a November 1 march through the town. The KKK's arrival on the day of the parade sparked 18 hours of rioting as militant anti-Klan groups fought with Klansmen. The local English language press blamed the violence on left ideologies within the Italian community, namely communism and anarchism. In her groundbreaking study of the Niles events, Ashley M. Zampogna reveals the confrontation from the viewpoint of the Italians as found recorded in the local Italian newspaper, Il Cittadino Italo-Americano. She concludes "the battle on November 1 was not a symbol of Italian tendencies for anarchy or sovietism but rather a final defense of American values." Throughout the rise in anti-Italian propaganda of the twenties, Il Cittadino Italo-Americano did not condone violence against the KKK, but encouraged Italians to continue to defend their rights in the political arena by seeking citizenship and registering to vote.

After WWI , attachment to Italy remained strong in the Italian community. But, as growing families experienced the birth of children born in America, many Italian natives opted for U.S. citizenship. The events surrounding the Niles Klan Riot, as reported in the local Italian press, illustrate how the Niles Italians thought of themselves -not as foreigners apart from American life- but really as Italian Americans embedded in the defense of their U.S. Constitutional rights. Through the 1920s and beyond, they would use their new identity and citizen status to better their situation. As restrictive immigration quotas and the extreme economic conditions of the Great Depression made contact with Europe more difficult, Italian Americans looked toward the United States as their permanent, rightful home.

Tweet
More in this category: « Filippino Lippi's Holy Family A Wax Artist’s Model from the Renaissance »