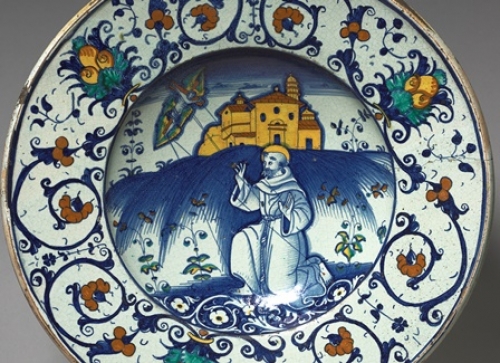 In the 1490s, the Italian humanist, Giovanni Pontano, extolled the virtues of dining as one of the most important social activities. In Italian households of the Renaissance, there was no place more suitable for expressing social aspirations, civility and splendor than the dining table. Following the Black Death in the late 1340s, Italy experienced changes in dining practices, food and cooking. A reduced population, for example, enjoyed a relative abundance of food, and the introduction of new foods after 1400 resulted in the unprecedented development of tableware, such as the specialized egg cup. Objects made expressly for the table reached their peak of sophistication by 1600 with growing numbers of ceramics, each form with its own specific function. During the early 1500s, ensembles of tableware were purchased for affluent homes, most notably the matching ceramic "service." The ceramic service was a large set of plates, bowls, pitchers, and other vessels, all uniformly decorated, often bearing the owner's coat of arms. The ceramic service during the Renaissance was generally produced in a technique called maiolica, much in fashion during the period.

Maiolica is the term we use today for Italian tin-glazed earthenware. However, in the early 1400s, it referred specifically to the colorful ceramics imported into Italy from Spain, especially through the island of Majorca along the shipping route between Valencia and the Italian ports. The name maiolica is thought to come from Majorca. Very quickly, Italian potters adopted this ceramic technique and made it their own. The development of high-quality ceramic products in Italy was dramatic. While maiolica was produced across the peninsula, from the Veneto to Sicily, the major maiolica workshops, those with the finest products, were generally located in central Italy. Production of maiolica continues today and visitors to Italy will easily find shops in major towns filled with these colorful ceramics in a variety of shapes and sizes.

The production of mailolica required exacting skills on the part of the potter. The workshops with their kilns were often located near forests which fueled the kilns. Special clay used in making the ceramics was dug mainly from river beds and purified. The dish or vessel was then made on a wheel, or by the use of plaster moulds, and given its first firing in the kiln. The plate or vessel was then dipped into a tin-opacified lead glaze known as the "bianco," since it coated the object and turned it white. Once dry, the plate was ready to receive its decoration. A maiolica painter applied the pigments to the vessel with a series of fine brushes. Maiolica painters were artists with unique training and often secretive control over their pigment recipes. In its range and subtlety of colors, Italian maiolica has rarely been equaled since the Renaissance. After painting, the ware was dipped in a bath of clear glaze and fired in the kiln once more.

The decoration of maiolica was variable according to the tastes and traditions of the town which produced it or according to the requirements of the patron who commissioned a service. Plates could be decorated with heraldry, religious scenes, or animal or plant motives. The entire outer surface of a dish or pot could be covered with highly colorful narrative scenes known as istoriato or "story-painted" maiolica. The stories depicted, often deriving from ancient mythology, the Bible, or classical history, were much in demand. Whole sets of istoriato maiolica were ordered by wealthy Italian families. A set was famously ordered by Eleonora Gonzaga as a gift for her mother, Isabella d'Este, in 1524. During the sixteenth century, the finest Italian maiolica such as istoriato was regularly commissioned by or for the richest, grandest, and most discriminating people of the time, both Italians and foreigners.

Before long, maiolica sets were being specially designed by major artists and commissioned by, or presented to, some of the most powerful princes in Europe, including the King of Spain, the Grand MaÃ®tre of France, and the Duke of Bavaria. Some maiolica painters began to think of themselves as full-fledged artists on par with the painters of frescos and portraits and began to sign and date their works.

In the second half of the sixteenth century, the Della Rovere Dukes of Urbino encouraged their local industry and commissioned services as diplomatic gifts to princes and kings. The finest Urbino maiolica was commissioned from the Fontana family by the Medici and formed part of the collection of the Grand Dukes of Tuscany. Part of this collection, which was probably the most spectacular collection of maiolica ever assembled, still survives in the Bargello Museum in Florence. Maiolica may be seen in many museums across the U.S. and Europe. The Cleveland Museum of Art has a particularly fine collection. When we see these colorful ceramics in Italian shops during our travels, it is worthwhile pondering the rich heritage of this noble art form and its origins in the Renaissance.

The Cleveland Museum of Art

Tweet
More in this category: « Expanding Italy's Reach An Ivory from Amalfi »