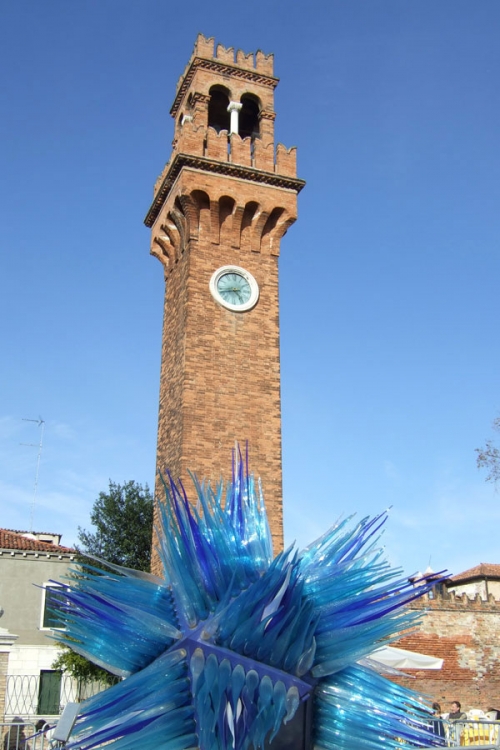 Natale di Vetro (Christmas of Glass) is an annual Christmas celebration in Murano, Italy, beginning on St. Nicholas Day and lasting one month. During this holiday event, Murano celebrates traditional glassmaking art highlighted by the Tunnel of Lights, Glassworks Regatta and Furnace Food.

The event kicks off on the evening of December 5 with a traditional Mass of St Nicholas, patron saint of glassblowers, at the Chiesa di San Pietro Martire. Afterwards the celebration continues with a traditional featured event, the Tunnel of Lights. Murano glass artisans have handcrafted ten chandeliers especially for Christmas, and these special chandeliers now illuminate the ancient portico of the San Pietro cloister with magnificence.

The island of Murano in the Venetian lagoon has ranked as the world's finest center for glassmaking since the thirteenth century. Still today, because of the refined glassmaking techniques, Murano is renowned all over the world. Originally in the city of Venice, the glassmakers were forced to move to Murano in the thirteenth century to prevent fires to the mostly wooden Venetian structures. The artisans were not allowed to leave the Venetian republic, and were elevated to special prominence.

As a focal point for the 2006 Murano celebration of Natale di Vetro, a well-known Murano master glass artist, Simone Cenedese, designed the world's tallest glass Christmas tree. Other glass masters and collaborators worked to complete this eight-meter-high tree, which was on display in Campo Santo Stefano that year, and in Venice's Piazza dei Leoncini the following year. Weighing three tons, the tree was three meters in diameter and consisted of 2,000 metal rods and 1,000 glass tubes. Illuminated by 40 halogen lights, this magnificent work of art lived up to its name, "Riflessi di vetro in un albero di Natale," or "Glass Reflections in a Christmas tree."

Cenedese designed another glass sculpture for the 2008 celebration, and this stunningly beautiful work of art is on permanent display at Campo Santo Stefano. Titled "Natale di luce in una cometa di vetro" ("Christmas of light in a glass comet") this blue glass sculpture has become Murano's symbol of Christmas.

As part of Natale di Vetro, entertainment of course plays an important role, and this includes music concerts and art exhibitions. On the streets of Murano and its squares will be awesome glass sculpture exhibits, as well as live demonstrations of glass-blowing by the Murano artisans. Several of the larger glassworks will be open to the public, allowing anyone an opportunity to experience the glass artisans honing their craft.

The Abate Zanetti Glass School will host free workshops for the children, where they can try glassblowing for themselves, with instructions from the masters. The school will also present glassmaking demonstrations, while answering questions about the various methods and stages of glassmaking.

One of the featured events is the Glassworks Regatta, where numerous watercraft race against each other in Murano's Grand Canal. These are six-oar caorline boats, and each one represents one of Murano's many glassworks factories. The participants are in costume, sometimes dressed as angels, and other festive characters, appropriate to the season. One of the most popular events, drawing large crowds of spectators, the race is highly competitive, especially since each team is sponsored by one of the glassmaking companies.

One of the highlights each year at Natale di Vetra is what is known as Furnace Food. This traditional crowd-pleasing event consists of traditional dinners prepared and cooked in the kilns by the glass masters, and held at various times at specific glass factories. Some of the glassworks organize wine tastings.

This special Christmas holiday event in Murano celebrate the rich history and traditions of glassmaking in this important artistic island, combined with the meaning of Christmas. Enjoy Natale di Vetro 2010!

More in this category: « Rome's New Maxxi Ten Thousand to One »