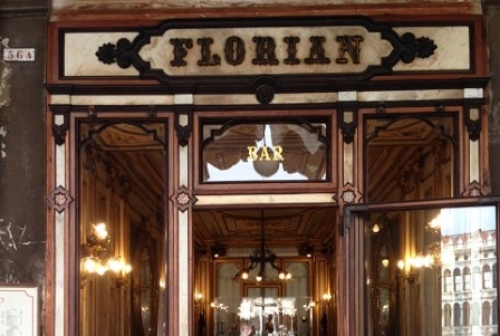 When you're in Venice, why not splurge? Caffè Florian is a must-see, just like riding a gondola is a must-do. The oldest caffè in Italy, and one of the oldest in Europe, Caffè Florian is definitely one of a kind. Located in St Mark's Square since 1720, this establishment has become a Venice icon.

Named after its original owner, Floriano Francesconi, Caffè Florian attracted the noblemen and was also the only coffeehouse to permit women to enter. In the early eighteenth century, this was a rare situation, so, from the beginning, Caffè Florian was a unique coffeehouse. Venice had over 200 coffeehouses which imported coffees from the Orient, a popular thing in those days and remains so today.

Famous playwrights and authors have been known to frequent this famous café: Dickens, Goethe, Lord Byron, Casanova, Wagner, and many others. A few years ago, during the filming of "The Tourist," Brad Pitt and Angelina Jolie were said to have stopped in for a cup as well. In fact, many celebrities and political figures including Woody Allen, Pierce Brosnan, and Silvio Berlusconi, have graced its doors, so you never know who you might see while you're there.

Caffè Florian cannot be missed as it includes a huge outdoor seating area. During the summer months, from noon until late evening, an orchestra serenades the customers as well as anyone strolling through the piazza. Inside there are seven elegantly decorated rooms, or grand salons, with plush velvet seating, marble tables, frescoed walls, mirrors, writing tables, and Murano glass chandeliers. The waiters are dressed in white dinner jackets and serve your drinks on silver trays. The original Caffè Florian began with two simply appointed rooms.

Caffè Florian is a great place to people-watch and enjoy any of the trademark coffees or drinks. Although it is not necessarily known to have the best food in Venice, it does pride itself on its caffe.

Of course the prices are out of sight, but this is Venice and this is the oldest café in Italy, so it's worth it! For instance, expect to pay 9 euros or more for gelato, 12 euros for a cappuccino, 13 euros for a beer, and 20 euros for a Bellini. The other surprise is the 6 euro charge, per person, for the live music, so be prepared. You can sit at your table as long as you like. I was there late one night, just before closing around midnight, and they were happy to have me wandering around inside and upstairs to have a look around.

More in this category: « The Culinary Legacy of the Quagliata Family Traveling along Abruzzo’s Wine Route »