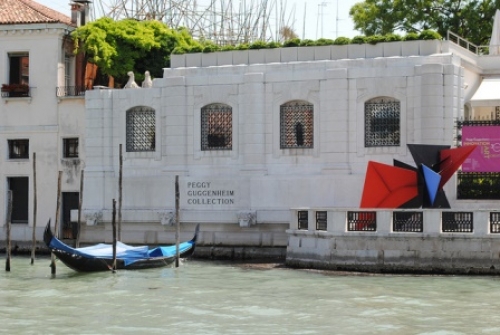 The Peggy Guggenheim Museum has become one of the top tourist attractions in Venice. Located directly on the Grand Canal in the Dorsoduro neighborhood of Venice, the Peggy Guggenheim Collection is particularly a favorite of those who are modern art fans. In a city where nearly everything else is centuries old, the collection features works from early 20th century American and European artists.

In 1949, Peggy Guggenheim purchased the 18th century palace, Palazzo Venier dei Leoni, directly on the Grand Canal, and she lived there until her death in 1979. Shortly after taking up residence in her new home, she held an art exhibit of sculptures in the garden. Beginning in 1951, she opened her art collection inside her home to the public, and this has remained the case ever since.

Considered to be one of the most significant collections of modern art in the world, the Peggy Guggenheim Collection includes paintings by Mark Rothko, Salvador Dali, Paul Klee, Joan Mirò, Max Ernst (Peggy's third husband), Jackson Pollock, Marc Chagall, Pablo Picasso, and many others. Most of the art focuses on surrealism and cubism, American modernism, Italian futurism, and also abstract expressionism. The sculptures in her collection appear in the garden. Every year the museum hosts visiting collections as well.

The uniqueness of this small art museum is its intimate setting. Knowing that this is the former home of the original curator and owner makes a difference. The museum is open every day except Tuesday, from 10 a.m. to 6 p.m. Admission is €12 for adults and €7 for students and children. Take the vaporetto to the Accademia stop and you will see the beautiful, white art museum before you even get off the water bus.

More in this category: « Expanding Italy's Reach Missal for the Franciscans of Montone »