The Culinary Legacy of the Quagliata Family 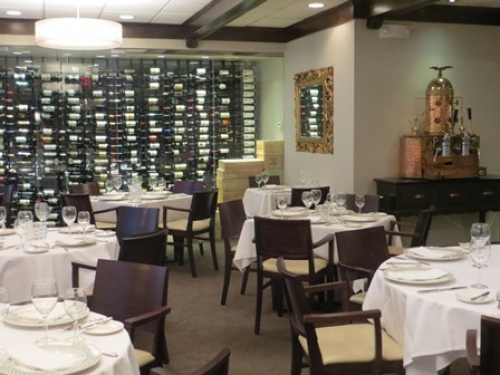 The Quagliata famiglia has created a legacy in fine Italian dining here in Norhteast Ohio.

The Quagliata enterprise begins with Dora Petti, who emigrated from Matrice (Molise), Italy to Canada and the U.S., where, in 1936, she married Angelo Quagliata (Sant'Alessio Siculo, provincia Messina, Sicily) at Holy Redeemer Church in Collinwood. Angelo delivered milk for Sam and Joe Manfredi, his family members who owned an east side Cleveland dairy plant while Dora worked at her papa, John's, Kipling Avenue grocery store. In 1944, Angelo and Dora bought the store from nonno Petti and named it Quagliata's Foods of Quality. Thirteen years later, they sold the store and bought another on Yale Avenue, naming it Angelo's Savmor which sold in 1967.

Around that time, Angelo, Dora and their three sons, Carl, Fritz and John, bought Uncle Fred Laricia's White House property in Mentor. With an extensive addition, renovation and elegant red flock interior, it became a replica of the White House in Washington. Without major fanfare, they opened with dining space for 100, a lounge and bar for 80 and entertainment by Jerry Tiffe. Mamma Dora, an expert in cake decorating, was in charge of desserts: cookies, lemon pies and cassata cake. She once made a wedding cake for her son, John, a replica of St. Patrick's Cathedral in New York City. Baking was her thing.

The White House eminence was so widespread that the restaurant became a major attraction for show biz personalities in town performing at the Front Row. Diners included Bill Cosby, Don Rickels and bowling superstar Dick Weber. In 1979, the White House closed and underwent a name change to the Italian Gardens.

As time passed, the Quagliatas' also opened top-notch food locations at Café Angelo and Chanterelle, where Carl introduced the famed Scintas to the local market before they became Las Vegas headliners. The Quagliatas' also operated at Tuscany's at Eton Square, Casa Dolce in Mayfield Heights and Piccolo Mondo in downtown Cleveland.

For Carl, however, it was a dream comes true when he opened his crown jewel of fine dining in Beachwood: Giovanni Ristorante. The restaurant continues to be magical. A masterpiece of elegance and comfort, the dining room's tables are comfortably and spaciously set. Excellent dining quality and impeccable service is the formula for Giovanni Ristorante, which boasts as many as a dozen Four Diamond Awards. The Distinguished Restaurants of North America honors Giovanni's annually. Their wine list inventory has also received awards for excellence.

Quagliata's Café Toscano in Aurora has been on the receiving end of exceptional reviews including Debbie Van Tassel's of the Plain Dealer who wrote "Tuscan heaven is as close as Aurora." Frequent diner Frank Cangemi of Miles Market called Toscano "a mouth-watering tradition of Italian cuisine for me, every time," and still another wrote "Diners serenade their stomachs with Italian dinner fare."

A short drive from Giovanni's Chagrin and Richmond locale is the excellent food, service and setting of brothers John and Fritz. John is at Crostatas in Highland Heights. Crostatas focuses on making the best traditional Italian dishes and Neapolitan thin crusted pizza cooked in an authentic wood burning brick oven. A short distance away in Mayfield Village is Alfredo's at the Inn, owned and operated by Fritz Quagliata and family members. Inside Holiday Inn, Fritz's experienced staff delivers a casual dining experience. Alfredo's at the Inn has prided itself for decades for serving family recipes including Italian favorites, such as pastas, veal, seafood, and steaks.

In all of their restaurants, the Quagliata family continues to offer excellent specialty Italian cuisine in friendly, enjoyable atmospheres. They say, "Precision and perfectionâ¦we're only as good as what we did today and our crowning touch is to be even better tomorrow."

Tweet
More in this category: « Starbucks to Open in Italy Caffè Florian in Venice »