A Rock Crystal Cross from Venice 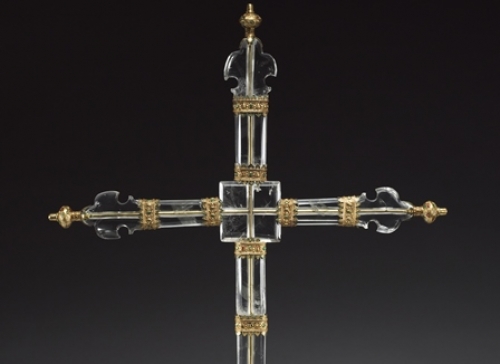 It is commonly known that Venice has a long history for glass production extending back through the Middle Ages. Even today, the city is still highly-renowned for its glass studios as any visitor to the city can attest. Her glass furnaces, centered on Murano, were well-known across Europe for refined and colorful creations in this material. Less well-known is that Venice was also an important artistic center in the Middle Ages for the carving of hardstones such as chalcedony, jasper and sardonyx. One of the hardstones favored by Venetian craftsmen was rock crystal. "Rock Crystal" is the name for clear, colorless quartz. The term, crystal, goes back to the ancient Greeks, who once thought that since the crystals came from high in the mountains, they might be ice frozen so deeply that it cannot melt ever again. While rock crystal is found all over the world, medieval Venetians extracted their rock crystal from the Italian Alps, probably removing it from deep inside caves. The material could then be carved, faceted and polished in a variety of forms including vessels, jewelry and crosses.

Surviving examples and inventories confirm the popularity of rock crystal crosses throughout Europe between the 12th to the 15th centuries. The rarity and preciousness of this hard stone, as well as its association with purity and light, made rock crystal especially desirable for use in altar furnishings. About 120 rock crystal crosses are known to survive today, and the majority of these are believed to have been carved in Venice, some it would seem for the export market or on specific commission. The Cleveland Museum of Art possesses one such cross. It stands about 27 inches in height and was made between 1280 and 1300, making it one of the earliest rock crystal crosses to survive. It consists of multiple pieces of rock crystal segments drilled through their centers and fastened together with a golden rod visible through the transparent stone. Where the pieces join, they are bound with decorative bands of enameled gold, creating a sumptuous object and illustrating why Venice was regarded as the pre-eminent center for crystal cutting in the Middle Ages. At some point in the cross's history, a figure of Christ may have hung crucified on it.

Byzantine artists maintained a tradition throughout the Middle Ages of working with rock crystal. The best collection of Byzantine hardstone liturgical vessels is today in the Treasury of San Marco in Venice, some of them booty from the Fourth Crusade in 1204. Through her political and commercial connections with the Byzantine world, Venetians likely adopted both Byzantine expertise and the taste for rock crystal objects. It is also possible that Byzantine craftsmen may have migrated to Venice from Constantinople and other cities in order to work there. Eventually, they could have taught their skills in crystal cutting to native Venetians. It is not known with certainty who commissioned the rock crystal cross now in the Cleveland Museum of Art. Though made in Venice, it is known to have passed through the royal treasury of Saxony. A long-standing tradition holds that it first belonged to Rudolph I of Bohemia in Prague (reigned 1273-1291). An inventory of the treasury of the Cathedral of St. Vitus in Prague, where Rudolph is buried, describes the presence there of three rock crystal crosses in 1334 and 1335. Perhaps one of these was the Cleveland cross. Such would attest to the refined taste of Rudolph's successor, the Holy Roman Emperor Charles IV (died 1378), who was also known for his love of polished hardstones imported from Venice.

Undoubtedly, the Cleveland cross, given its opulence, was intended for prominent display. It probably adorned an altar, possibly in a private chapel, and may have also been carried in ecclesiastical or royal processions. It would have sparkled in the presence of flickering candles and oil lamps and the sun may have penetrated the rock crystals at morning mass. For the viewer, this would have been readily perceived as a special and deluxe cross. Objects fashioned in rock crystal and other translucent hardstones could transcend their liturgical and ceremonial functions and induce deep meditative feelings of spirituality in the beholder. Gemstones, rock crystal, pearls, and cut glass were often used to embellish other liturgical objects for service on or near the altar including reliquaries, cruets and chalices. The translucence of gems and precious nature of hardstones was often associated with "clarity" and the emanation of divine nature. Hardstones were thus thought to bring the worshipper closer to God. They acquired a Christian mystical association during the Middle Ages. Rock crystal, in particular, was associated with the Virgin due to its purity and translucency.

We know little about the rock crystal cutters in Venice or even the location of their workshops or how they trained. The Venetian rock crystal cross now in Cleveland was intentionally opulent and would have been an expensive commission. Its presence on an altar would have expressed the high rank of its patron, his sublime taste, and would have functioned as a meditative source of deep spirituality. Venice's rock crystal carvers were regarded as the best in Europe before the Renaissance, and their products would have been sought by persons of high status, like Rudolph I. This beautiful cross still speaks to us after 700 years. It reminds us of the once special character of this elite material called rock crystal and the prominent role played by Venetian craftsmen in its history.

The Cleveland Museum of Art

More in this category: « Expanding Italy's Reach The Power of Relics »