“Cortile Cascino” and “Children of Fate” 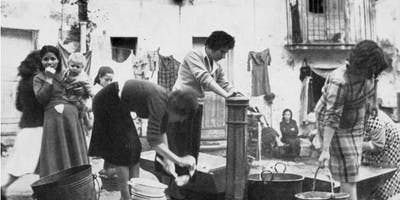 “The world depicted in my father’s film ‘Cortile Casino,’ which was filmed in 1961, feels more like a relic of medieval times than something captured in modern-day Italy. Interest from Channel 4 in the UK offered my wife Susan Todd and I the chance to update the film by finding out what had become of Angela and her family thirty years later. What we found when we returned to Palermo surprised us. The infamous slum was gone, raised to construct apartment buildings for the middle class. The poor had been disbursed. We found Angela living in a modest but clean apartment with plumbing, electricity, and a color TV. Her kids, in their Italian designer clothing, looked more put together than we did. Some had cars. The material improvements to their lives were profound, but as we began to document their new situation it became clear that the past still had a powerful grip on them. Angela’s son-in-law had just died of a heroin overdose and during our filming, her 34-year-old daughter died of cancer, an eerie reminder of the child Angela lost when my father was filming. It was sobering to see how deeply poverty, crime and drugs had become enmeshed in their culture – that good housing alone was not enough to erase it. But the most striking thing was the resilience of Angela, a tireless mother born into bad circumstances, who did whatever she could to protect her children from the harsh world around them. Another 30 years have passed since we filmed the update. Sadly, Angela passed away in June 2021. Her grandchildren are growing up in a very different world than Cortile Casino, and from what I can tell from Facebook, most appear to be much better off, thanks in-part to their grandmother. But the scars of the past run deep and the world around them has complex new challenges. I continue to wish her family the best.”

In 1959, Robert M. Young, now in his 90s, read the book, “Report from Palermo,” by Danilo Dolci. It is a shocking and disturbing account of corruption and poverty in Sicily. He was inspired to produce a film about one area in particular, Cortile Cascino, on the outskirts of Palermo where thousands of Sicilians lived in wretchedness. This slum was called the “Well of Death” because so many children were born and died there.

“Cortile Cascino” was written and directed by Michael Roemer and Robert Young and photographed by Robert Young. The spoken commentary was based on recorded conversations of the people of Cortile Cascino using their own words wherever possible. Angela, the main character, is a young mother in an abusive relationship, left alone to care for her three children while pregnant with another. As happens often in this poor town, her youngest child, sickened with a fever and unable to eat, tragically dies. The film documents Angela’s miserable existence, typical of a wife and mother living in a forsaken town.

Originally scheduled to air on NBC’s “White Paper,” the network reneged and ordered that the film be destroyed because it was thought to be too powerful to show to an American audience. Fortunately, someone in the film department at NBC had the courage and foresight to surreptitiously make a copy of it and years later, contacted Young and gave it to him. Consequently, Robert’s son, Andy, went to Cortile Cascino in the early 1990s to revisit Angela’s family and make another film called “Children of Fate,” recording new footage and combining it with the old.

In “Children of Fate,” Andy Young brings the viewer up-to-date on Angela, 30-years-later, now divorced and faring better, with her children and grandchildren. Angela narrates most of “Children of Fate” and listening to her recount her and her children’s lives in Cortile Cascino is heart-wrenching. While visiting her former home and remembering her struggles there, she posits that the original movie showed only 1 percent of the suffering that the people of Cortile Cascino experienced. “Death, she says, “has always been with us, and we are afraid of it,” but in Sicily we say: “Meglia la morte che la mala torte.” Death is better than bad luck.

While poverty exists in many countries of the world, most of us do not fully understand the depths of despair caused by such to poverty and the societal and fiscal chains that hold the poor in bondage making it impossible for them to change their circumstances. Sometimes we need to watch and listen and, difficult as it is, learn and sympathize. Though most of us will not be social activists, we can find ways to help.

Unfortunately, “Children of Fate” is not currently available for streaming - a situation that hopefully will change soon. “Cortile Cascino” can be seen on YouTube.