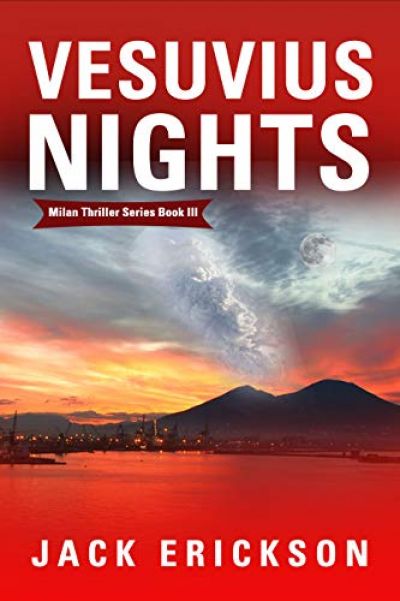 Antonella Amoruso, senior deputy of Milan's anti-terrorism police, receives a call to return to her Naples hometown for the funeral of a family member murdered in a Camorra clan feud.

Amoruso is plunged into the dangerous culture of Camorra, Naples’ violent criminal syndicate, that thrives on illegal drugs, prostitution, extortion, and murder. Antonella's goal is to rescue her family from Camorra's deadly grip.

The third installment of Jack Erickson’s Milan Thriller Series does not disappoint. Full of suspense, tension and family drama, Erickson keeps the reader engaged throughout the one-week timeline of the story. Perhaps the best part is how Napoli becomes its own character in the book as we are thrust into the dark and dangerous side of the famous Italian city.

Jack Erickson writes in multiple genres: international thrillers, mysteries, true crime, and romantic suspense. His “Milan Thriller Series” features Italy's anti-terrorism police, DIGOS. High-level police sources at Milan's Questura (police headquarters) provide Erickson with details on DIGOS’ investigative procedures. Book one in the series is “Thirteen Days in Milan.” The sequel, “No One Sleeps,” was published in 2017. “Vesuvius Nights” was published in 2019 and the fourth installment, “The Lonely Assassin,” was released in 2020.

Erickson travels throughout Italy for research, interviewing sources and sampling Italian history, art, and culture. He has studied intensive Italian at La Scuola da Vinci in Rome, Florence, Milan, and Siena. On frequent visits to Milan, he spends time with Italian and American friends, goes to opera at La Scala, and enjoys aperitivo at popular Milanese restaurants and trattoria.

Erickson is a former U.S. Senate speechwriter, Washington-based editor, and RedBrick Press publisher. In the 1980s and 1990s, he wrote and published several non-fiction books on the early days of the craft brewing industry. His first book, “Star Spangled Beer: A Guide to America's New Microbreweries and Brewpubs,” was named best self-published book in 1987.

Erickson lives in northern California with his wife.

Tweet
More in this category: « “Cortile Cascino” and “Children of Fate”