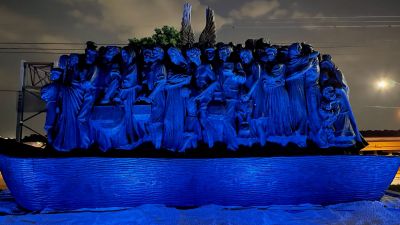 For over 25 years, Canadian artist Timothy Schmalz has been sculpting large-scale sculptures. He is a figurative artist with his pieces installed worldwide. Some of his most reputed pieces are installed in historical churches in Rome and at the Vatican. Timothy describes his most important work as visual translations of the Bible. Although most of his work is based upon a spiritual theme, he also creates large, complex public sculptures in bronze. Some of these include monuments that honor veterans and firefighters. Timothy strives to create epic artwork that connects with viewers through design and details that not only touch the viewer on an emotional level, but also allow them to feel somewhat a ‘part’ of the piece.

One of Timothy’s recent works “Angels Unawares,” is a large, bronze sculpture installed in 2019 in St. Peters Square in Rome. The six-meter-long sculpture depicts a group of migrants and refugees on a boat wearing clothes that show they originate from diverse cultures and historical moments. A second bronze cast replica of “Angels Unawares” is currently on a one-year tour across the U.S.

Sunday, June 20 was world Day of Refugees. “I hope to make people aware of this event, and consequently, shine a light on the refugees on this special day. The sculpture entitled ‘Angels Unawares’ is meant to bring awareness of the refugee, to have the work highlighted in Texas, which is the hot spot of migration now, is a perfect opportunity,” Timothy told La Gazzetta. Timothy’s replica refugee sculpture “Angels Unawares” now in San Antonio was cast in blue light, the symbol of the United Nations.