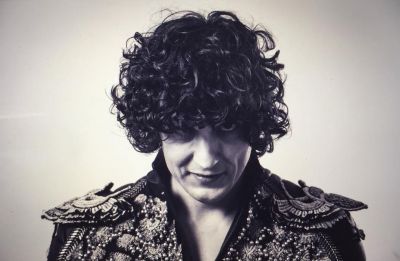 What is sometimes lost among the roar of the crowd and the glare of the bright lights within the entertainment industry is the fact that behind some of those smiles, are people dealing with painful memories. The admonition of “one must walk a mile in another person’s shoes before judging them” holds true to this day. Take, for example, the story of Ermal Meta, a singer/songwriter and poly-instrumentalist who was born in Fier, Albania on April 20, 1981.

Ermal, whose name means “mountain wind,” grew up in a polarizing home setting; culturally nurtured by his mother, a professional violinist, but also suffered greatly at the hands of an abusive father. By age five, he began seeking refuge from his ordeal and gravitated toward music for solace and inspiration. The political climate in Albania during the nineties was a period of instability as communism had fallen and the country lacked direction, offering little hope and few opportunities for Ermal and those of his generation. At age 13, the difficult decision was reached whereby he, his mother, brother, and sister fled the country and relocated to the Italian port city of Bari in the southern region of Puglia to begin life anew. They were immediately welcomed with open arms and, within a few years, Ermal began his musical journey by learning to play both the piano and guitar.

He joined several fledgling bands in the process and performed publically throughout the region. He also enrolled in college during this time and began formal studies in foreign languages only to later abandon his education to exclusively pursue his musical aspirations on a full-time basis. He achieved his objective of forming his first band as he partnered with Fabio Properzi (guitarist/vocalist), Tullio Ciriello (bassist) and Luca Giura (drummer) to form the group “Ameba 4.” The outfit caught the attention of noted record producer Corrado Rustici with their demo tape. This fruitful relationship led to an invitation to participate at the 2006 Sanremo Music Festival in the “Giovani” portion of the competition. The entry “Rido forse mi sbaglio” was eliminated but would lead to the signing of a recording contract with legendary record producer Caterina Caselli on her “Sugar” music label. Their eponymously titled debut album in 2006 featured their Sanremo single along with 12 other original compositions.

After a brief tour in support of their release, the band would break-up in 2007. The recording and touring experience proved invaluable to Ermal and he used the opportunity to front his own group which he christened “La Fame di Camilla.” With complete artistic control, he developed and refined the group’s music catalog and sound production to his liking. The group participated in numerous public exhibitions and musical festivals all throughout Italy and Europe plying their trade and sharpening their performance skills for a couple of years. It was only then that he was prepared to release the group’s debut album, “La Fame di Camilla” (2009). The album was well received and the single/video “Storia di una favola” garnered awards and earned the band much-deserved notoriety. The group’s good fortune continued with an invitation to the 2010 Sanremo Music Festival as they submitted the song “Buio e luce.” Although the entry was eventually eliminated from the competition, the song would serve as the title track to their second album (2010).

The release entered the charts, enjoying a lengthy stay and found its way into numerous radio playlists earning valuable time in regular rotation. An extended tour throughout the peninsula exposed the group to new markets thereby generating increased record sales. The group eventually returned to the studio and released their third and final release “L’attesa” (2012). The single/video “Suzy e l’infinito” became another hit for the band. The recording was tabbed by the critics as the group’s best, as it reflected maturation in the band’s music and lyrics. Despite all the positive results, Ermal sensed that he needed to reach the next level of his personal development and that would require that he disband the group and embark on a solo career.

Wasting no time, he immediately began writing compositions for other established artists including Emma Marrone, Francesco Renga, Patty Pravo, Chiara Galiazzo, Marco Mengoni, Francesca Michielin, Francesco Sarcina, Giusy Ferreri, Annalisa Scarrone, and Lorenzo Fargola. Emboldened by the demand for his talents, Ermal made the difficult decision to leave his family in Bari and move to Milan. Once he settled in the music epicenter of Italy, he commenced work on his debut solo album “Umano” (2016). Ermal played the majority of the instruments on this recording and composed nearly all the music and lyrics. The recording was self-produced and yielded four hit singles including “Odio le favole,” which was entered into the 2016 Sanremo Music Festival in the “Nuove Proposte” (Newcomer’s Section), finishing in third place.

His momentum continued with his second solo release “Vietato Morire” (2017). The album achieved platinum sales and the title track was entered into the 2017 Sanremo Music Festival and finished in third place among the 20 other contestants in the “Categoria Campioni” (Champions Category). Ermal’s best was yet to come and his star burned brightest at the recently concluded 2018 Sanremo Music Festival as his composition “Non mi avete fatto niente,” co-written with and performed as a duet with Fabrizio Moro, captured first place at the prestigious annual Italian music competition. The hit single made its way onto his third solo album “Non abbiamo armi” (2018) which has already entered into the charts. Because of their victory, Ermal and Fabrizio will represent Italy at the 2018 Eurovision Music Competition in Lisbon, Portugal in May of 2018.