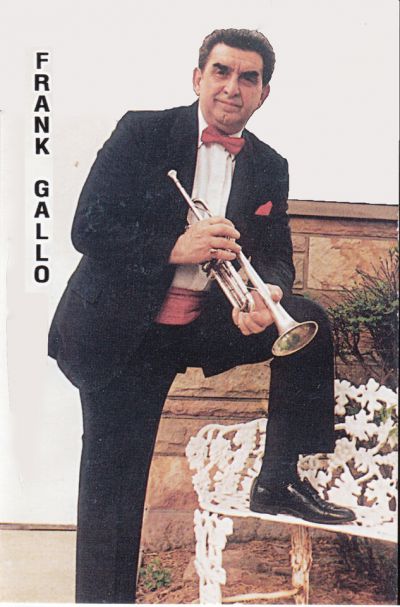 The recent celebration of Frank Gallo’s 90th birthday reminds us that this local celebrity continues to enrich our Italian American culture with his music and comedy. Born in Western Pennsylvania’s soft coal country, the veteran singer has a decades-long career delighting audiences in live performances and on recordings. Frank Gallo interprets our parents’ and grandparents’ musical tastes for the new generation. You may have heard him with the Frank Gallo Band at a wedding, at an Italian festival, at the Mountaineer Casino, or on WPIC’s The Italian Show. Gallo is the area’s oldest performing vocal artist.

La Gazzetta (LG): Happy birthday. Frank, it’s great that you’ve given us the opportunity to chat about your long running career in the Greater Youngstown area. Let’s start at the beginning, with your roots in Western Pennsylvania.
Frank Gallo (FG): Thank you. I was born in Brownsville, where a lot of Italians had arrived as immigrants to work the Pennsylvania coal mines. I trace the start of my career to when I was 15. We had moved to Youngstown. One day I picked up my uncle’s trumpet. When we went back to PA, I started playing in the brass section of the United Mine Workers’ Band. With my palsy now, I’ve had to quit the instruments but I continue to sing around the Valley.

LG: There were quite a few night clubs in Youngstown in the 1940s and 50s. The Club Merry-Go-Round, West Side Social Club, Black and Tan Club, Ritz Bar and Supper Club, Cascades at the Hotel Pick-Ohio, Casablanca, Southern Tavern, Cotton Club, and more. What was your experience in the live music scene after WWII?
FG: There were plenty of places to play. In a year, I’d rack up almost a hundred appearances. You didn’t have to research a job. You’d sit home and the phone would ring three or four times a week with requests for your act. Then there were the Italian social clubs. Many Italian towns had their own fraternal organizations in the Youngstown area: the Duca degli Abruzzi, Pacentresi, Bagnolese, and so on. Then there were the Italian American Clubs (ITAMs) and the Sons of Italy. We had dance halls, like the Elms Ballroom, for one. So many local venues for live music performances. It’s almost all gone now, except for the festivals.

LG: Speaking of the festivals. You’re still doing them.
FG: Oh yes. The Brier Hill Festival, the Our Lady of Mount Carmel Basilica Festival, The New Castle Italian Festival, and a couple of others. Brier Hill is probably no more than two and a half acres. Per square foot, no festival comes close to the turnout there. The Warren festivals are always big and I’ve played them, too. In fact, not long ago, I was grand marshal at the Warren Italian American Heritage Festival.

LG: You seem just as comfortable singing in Italian as in English. Your Italian vocal repertoire is well-known in the Mahoning Valley. Tell us about your relationship with the language.
FG: My parents were born in Italy. My mother was from the North, Perugia, and my father from Calabria. They were of the generation that wanted their children to speak in English only. You have to realize that 90 years ago a tremendous amount of prejudice existed against Italians: that was the reason my mother once gave me for not teaching me Italian. But, on my own, I learned Italian, really, from studying the language. I love the sounds. I’ve even translated American song lyrics into Italian.

LG: Some of the most popular Italian songs are in dialect. I’m thinking of ones in Calabrese and Napolitano. Do you have a few favorites?
FG: Those romance songs, I love to sing them. “Un bacio d’amore” (Tell Me You’re Mine) and “O sole mio”.

LG: Let’s talk about other events you’ve played in the Valley.
FG: Oh, I’ve played so many places: wedding halls, Italian festivals, anniversaries, clubs, dance halls, park concerts, even a short stint at the Mountaineer Casino, and so many celebrations at the DiVieste and DiLucia Halls. But the Idora Park Ballroom was the venue. It was known nationally for the top acts that performed there. I played Idora often.

LG: You blend comedy into your performances. While on stage, you’ll sometimes slip into your Uncle Vittugio character. Can you say something about him?
FG: He’s a nice, little Italian guy, nothing brilliant. Straw hat. Broken English. It’s a name from the past. I forget just where. It strikes a chord with people.

LG: Do you think when you do the Uncle Vittugio routine people remember their immigrant relatives?
FG: That could be it.

LG: What’s your connection to the Gaylords, a group that was very popular here for years?
FG: Well, the Gaylords, I introduced them to the Mahoning Valley. It all started when I first heard their song, “Tell Me You’re Mine,” an English rendition of “Per un bacio d’amore”. That was back in the 1960s. I fell in love with that song and with the group’s sound. Did you know that they composed a song for me, “Amore mio?” The Gaylords were very knowledgeable about Italian music. It was through Joe Migliozzi, who had an Italian program on the radio, that I got a hold of Burt Holiday (Bonaldo Bonaldi). I asked him to appear here, in the Youngstown area. After their two gold records, the group was in a slump. I arranged for them to put on a show at the ITAM Club on Meridian Road. Soon they began to attract attention from all over the state. They drew good crowds and always appreciated that I had helped them break into a new market in this part of the country. They were my buddies.

LG: I hear that every year you play for the Dean Martin Festival in Steubenville.
FG: I’ve played that venue for 17 years and I’ll go back again this year. Last year we had the best attendance ever, about 700 people. I do a lot of my comedy stuff for that event.

Tweet
More in this category: « From the Italian American Press Triumphing over familial, cultural and professional obstacles Ermal Meta »