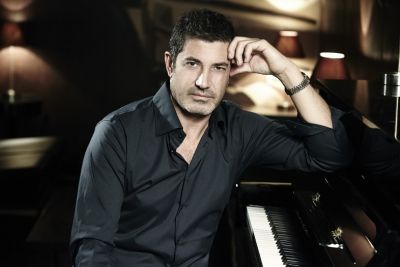 “Talented,” “charismatic” and “intense” are some of the adjectives that have been used to describe the artist known as “Giovanni Costello.” His distinctive warm, deep and soulful baritone voice combined with his virtuosity on the piano make for a musical experience that has captivated audiences throughout Italy and Europe for over two decades. He was born Giovanni Pazzaglia on May 2, 1966 in the small comune (village) of Umbertide, located within the province of Perugia in the central region of Umbria.{/mprestriction}

From an early age, he discovered and cultivated his vocal, instrumental and compositional skills. He earned his diploma in 1989 by completing his studies in classical piano theory at the local Conservatorio di Musica di Perugia. Giovanni then relocated to Milan to continue his formal education by refining his compositional skills by focusing intensively on pop and jazz sonorities. Upon graduating, he began touring local clubs and venues gaining valuable live performance experiences while developing his own unique onstage persona. Giovanni also established vital professional collaborations by accompanying several renowned international musical artists such as Shirley Bassey, Paul Kuhn, Haddaway, Paolo Mengoli, and Mino Reitano. These performances allowed him to gain visibility throughout Europe and the U.S. as he demonstrated his keyboard skills and vocal expertise in an important supporting role.

Giovanni’s musical influences include a broad and diverse range of performers that he credits for shaping his repertoire and providing him with immeasurable inspiration. He lists among his personal favorites: Ray Charles, The Band, Blood Sweat and Tears, Paolo Conte, Tom Jones, and Ennio Morricone. Seeking to develop and grow his own personal fan base, Giovanni concentrated on participating in elite jazz music festivals and performing in classical concert settings that accentuated his stage presence and audience rapport.

As he developed his music catalog of original songs along with an exquisite collection of jazz, pop and soul standards, he made the important decision to share this music by completing his debut recording hoping to reach the masses. His dream was realized as the album “Io senza te” (2005) was released on the Sound and Silence music label and distributed through the popular Portland-based CD Baby, Inc. web-based independent music store; in both digital and CD format. The recording contained 10 cuts, four sung in English and six in Italian. It featured one original, the title track; the remaining songs were popular covers. The album received some welcome airtime throughout Europe and the U.S. and for the first time gave new listeners an opportunity to hear his unmistakably unique and appealing voice, often drawing comparisons to R&B legends Barry White and Lou Rawls.

Giovanni toured relentlessly and even relocated to Germany to seek a change in surroundings and hoped for some measure of success by following in the footsteps of other Italian artists who ventured outside of Italy such as Salvatore Adamo, Toto Cutugno, Al Bano & Romina Power, Alessandro Safina, and Ricchi e Poveri. The results were virtually immediate and personally gratifying as, in 2011, Giovanni was chosen to participate in the country’s top television national music talent show “The Voice of Germany.” He was selected by established German Soul and R&B singer/songwriter and producer Xavier Naidoo (Kobra) to join his team and become a protégé. Giovanni presented his interpretation of Louis Armstrong’s evergreen, “What a Wonderful World” and received instant and unanimous positive response. During the competition, he also performed memorable renditions of Frank Sinatra and Tony Bennett jazz standards but was eventually eliminated from the contest. Nonetheless, he was later invited to appear on the television program “Xavier & Friends” singing alongside his musical mentor.

He soon released a four-song EP “True Italian Story” (2011) on the German Escape Route music label. The Italian cover songs contained within featured Mina’s “Parole Parole” and Renato Carosone’s “Tu vuo fa l`Americano” which were especially popular. In October 2012, Giovanni sang the Italian national anthem to over 40,000 spectators and broadcast on national television at the Commerzbank Arena in Frankfurt before the start of the “Italy versus Germany – Game of The Century” friendly soccer match played by retired sports and entertainment personalities from both countries in commemoration of the famous match played between the two national teams at the 1970 World Cup in Mexico. Once the excitement gradually wore off, he returned to the studio and set his sights on recording his next album. This one would contain only new, original compositions in conjunction with a full jazz orchestra accompaniment. The result, “Il Gioco” (2013), his third release (second full-length album), contained 12 self-penned songs and was produced and recorded with the legendary 17-piece German jazz group SWG (Südwestrundfunk) Big Band. Together, the ensemble set out on an ambitious year-long tour throughout the country in support of the release. He broadened the playlist of the live performances by including re-interpreted versions of hit songs by fellow Italian recording artists including Eros Ramazzotti, Zucchero, Paolo Conte, Lucio Dalla, and Fred Buscaglione.

Giovanni’s growing popularity afforded him the opportunity to perform in North America as he has made stops along the way that included shows in Los Angeles, Miami and Naples, FL. Two of his more recent projects include another soon-to-be-released recording entitled “Puro” which will build upon the favorable response he received when he re-interpreted some of Italy’s most beloved and memorable songs; this time in an intimate and modest three-piece jazz-style setting. He also plans to produce his first live release featuring the best moments of his recently-concluded tour with the SWR Big Band Orchestra.

Tweet
More in this category: « Little Italy's Billy Donato Comes to Hard Rock Rocksino The European Migrant Crises Through the Eyes of a Film Director and a Writer »