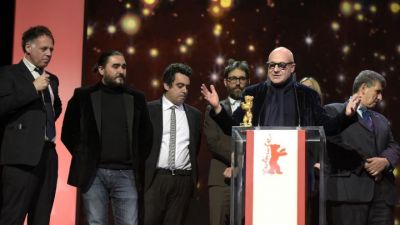 Gianfranco Rosi and Enzo Gianmaria Napolillo make one of the greatest human tragedies of our times the focus of their most recent work.

After winning the Golden Lion at the 2013 Venice International Film Festival with the  documentary “Sacro Gra,” acclaimed Italian film director Gianfranco Rosi went to the Sicilian island of Lampedusa, landing place of thousands of migrants in search of freedom, to tell the story of “Fuocoammare (Fire at Sea)” one of the greatest human tragedies of our times.

Following his total immersion method, Rosi moved to the tiny island for over a year during the European migrant crisis to experience firsthand the migrants’ dangerous Mediterranean crossing set against the backdrop of the ordinary life of the residents of the most symbolic European border. Witnesses to this tragedy of unimaginable proportions are 12-year-old Samuele, who comes from a local fishing family, goes to school and likes to play with a slingshot, and a doctor who, moved and upset, recounts stories of migrants he treated on their arrival or of bodies recovered at sea that he had to inspect. Everything around the two of them speaks of the sea and of the uninterrupted “wave” of thousand of men, women and children that, over the last 20 years, have been attempting to cross perilous waters in search of safety and freedom.

“Fuocoammare” won the Golden Bear at the 2016 Berlin International Film Festival. In his acceptance speech, Rosi said that his intention was to heighten awareness of the migrant situation: “It is not acceptable that people die crossing the sea to escape from tragedies.” Meryl Streep, chair of the Berlin jury, called the work “a daring hybrid of captured footage and deliberate storytelling that allows us to consider what documentary can do. It is urgent, imaginative and necessary filmmaking.”

Rosi’s work was nominated for the upcoming Oscars for Best Documentary Feature. It was also selected as the Italian entry for the Best Foreign Language Film. The film was also appreciated by the former Italian Prime Minister Matteo Renzi who stated that he would carry with him 27 DVDs of the film to a session of the European Council.