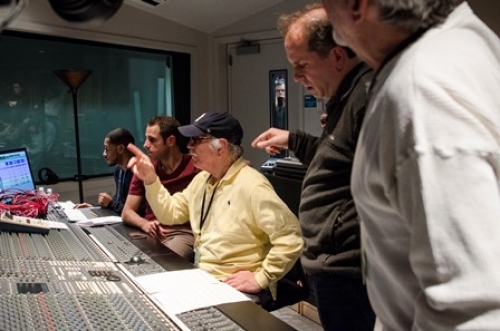 Dominick Farinacci, arguably one of the best musicians of his generation, is set to release his debut recording with Mack Avenue Records, “Short Stories,” on June 10, 2016. Born in Cleveland, OH, Dominick began playing trumpet in the sixth grade and quickly found his love for the instrument. Listening to the greats such as Louis Armstrong and Harry James, he worked on imitating their sounds. Soon after, Farinacci joined a music program at Cuyahoga County Community College in Cleveland learning the ins and outs of playing in bands both big and small, as well as improvisation and music theory. By eighth grade, Dominick and his band had steady gigs around his home town. At the age of 17, he opened for the great Wynton Marsalis and his big band at the Tri-C Jazzfest in Cleveland. The supportive Marsalis invited Dominick to perform with him in NYC on a live PBS Broadcast, “From Lincoln Center: A Tribute to Louis Armstrong.” During that time Farinacci auditioned for a brand new program at The Julliard School and was accepted as only one of four trumpeters in the world to be in the inaugural class of the Julliard Jazz Program.

Throughout his school years and afterwards, Farinacci received many awards and honors. But, perhaps, one of the most influential moments in his career was being named the first Global Ambassador for Jazz at Lincoln Center. He traveled to Quatar, spending two years in the Middle East. Here he “broadened his activities to include dozens of different projects, where the goal was, through his music and outreach activities, to unite communities and overcome barriers of every sort: nationality, religion, musical taste, as well as economic and educational statuses in Qatar and Abu Dhabi.”

“Short Stories” unites Farinacci with Producer Tommy LiPuma; five-time GRAMMY® Award winner who has worked with the likes of Sir Paul McCartney, Barbra Streisand, Miles Davis, and Diana Krall, amongst his many other accomplishments too large in number to even touch on here. Being from the same home town isn’t the only thing that cultivated this relationship. “What unites them is a clear, modern aesthetic vision that combines the highest musical standards with a desire to be agents of change.” “LiPuma recently said, ‘Every so often I meet a young artist who has what I call an old soul - that's Dom! He's a rare bird--persistent as all heck, but in a nice way, like all the greats I've known. I was shocked at how quickly he adapted his live performance style to what we needed in the recording studio--I was blown away.’”

“‘Short Stories,’ is a compelling suite of music with a repertoire that spans genres and generations united by the trumpeter/composer's soulful conception. Bringing together songs from Tom Waits, Horace Silver, Dianne Reeves, and the Gipsy Kings as well as original compositions, Farinacci has managed to create his own musical universe, aided by musicians of the highest caliber.”

In Farinacci's own words: "While ‘Short Stories’ is the title of this particular recording, it has come to represent a culmination of things I'm most passionate about - performance, education, music & wellness and community-based cultural collaborations - unfolding in the music and touring around the world."

For a list of Dominick Farinacci’s tour dates, including his June 25 performance in Cleveland as well as the trailer for “Short Stories,” visit www.dominickfarinacci.com.

Tweet
More in this category: « Audio 2 Around the Horn with Dominick Farinacci »