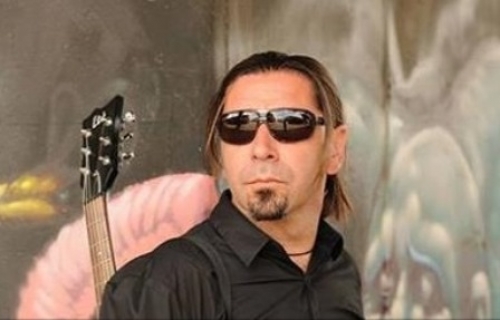 The life of a child who is born to immigrant parents can be challenging as they will be exposed to two different cultures and often they must choose one over the other. Assimilation into the new society is encouraged in order to “blend in” with the “locals.” South African guitarist/singer/songwriter Albano Prestia was faced with just such a dilemma. His father was originally from Mazara del Vallo on the extreme southwest edge of the Sicilian province of Trapani and his mother hailed from the small town of Itri located between Rome and Naples in the province of Latina. They met in the small gold mining town of Nigel on the eastern edge of the Gauteng Province in 1963 and they would later marry in 1970.

Albano was the second of two children and was born in 1974; just four years later his father would die. Living conditions at the time would be difficult for the young Prestia family as the language barrier posed a problem. They courageously faced and overcame the challenges and, in time, Albano’s mother would re-marry and give birth to another son. Italian was the first language he learned while growing up and later he mastered English in school. His parents were typical hard-working individuals and these traits were not lost on the children. Many of his friends were children of other Italian immigrants who originated from all different parts of the Italian peninsula. Italian music was a common staple in the Prestia home during Albano’s formative years and many of his parents’ favorite artists became very familiar to him. By nine years of age he was taking piano lessons, but his preferred instrument of choice would later become the guitar and by age 18 he formed his first music group named “BC Dance.”

His early Italian contemporary influences included the likes of Eros Ramazzotti, Biagio Antonacci and Gianna Nannini. His first compositions were written in English and he attracted the attention of Virgin Records who signed his group to their first recording contract thereby becoming the first band in South Africa to attain such an achievement. He found the directives of the record company, however, to be too demanding and restrictive for his own personal tastes. The agreement was terminated and, upon the advice of his mother, he returned to school and earned his degree in electrical engineering. Albano never distanced himself too far from the music scene so he chose to study vocal techniques under the supervision of Enrica Gozzi, who at one time studied opera in Milan and also performed at the prestigious Teatro alla Scala. After hearing how naturally and effortlessly he communicated his emotions when performing some of the Italian classics, she strongly advised Albano to consider singing in Italian instead. He complied and felt an immediate sense of connectedness to his parental origins which had only been a place he knew through stories and pictures.

Albano defended his decision to sing in Italian by stating that he personally felt it is “the most beautiful language” and “Italian music has the most beautiful melodies and music and, at the end of the day, is universal.” He was quite comfortable with his choice in spite of him living thousands of miles away in South Africa. Albano entered the studio to record his debut album “Diavoli e angeli” in the late fall of 2014. The release contains 11 songs and features a mix of ballads such as “Con te,” “Insieme” and Sei bellissima” to up-tempo songs including “Dio in me,” “Grazie a te” and L’autostrada;” all of which were spiritually inspired and written by him over the course of many years. The first single released was the poignant tribute “Mandela,” which he wrote in honor of the legendary anti-apartheid revolutionary, politician and philanthropist. It was released on the one-year anniversary of his death on Dec. 5, 2014 and dedicated to a man that Albano considers as one of his heroes.

He was later invited to perform at two music festivals in Italy in 2015: Milan’s Italian Music Talents competition and Rome’s Good News Festival. The contest judges included many notable Italian music industry dignitaries including legendary female vocalist Patty Pravo. In February of 2016 he participated in the Sanremo DOC music showcase which was run concurrently with the annual Sanremo Music Festival. The five-day experience included performances each night, interviews and inclusion of his new song “Ciao” on the competition compilation recording. Upon his return to South Africa, Albano released a mini-CD entitled “2016 Singles” which features the Sanremo DOC single along with three new songs. He has stated, “I love music. I love writing music and I hope that it inspires others the way it inspires me.”

For more information, you can visit his website at www.albanoprestia.com