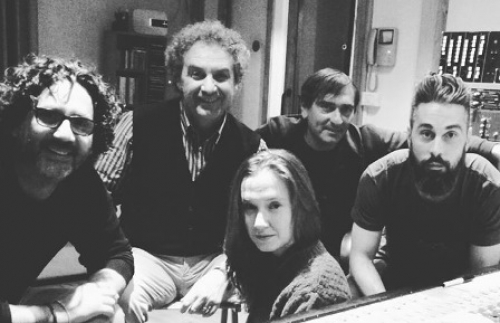 The saga of any musical entity, be it an individual artist or collectively as a group, is unique and a story all its own. Many are born and raised in a musically-endowed familial environment that nurtures this passion. Some are the by-product of their social surroundings that inevitably influence them and a few simply discover their hidden talents due to unanticipated occurrences. The circumstances that brought together female vocalist Maria Ghelfi and guitarist/songwriter Marco Zoccarato not once, but twice, would forever entwine their destinies in the pursuit of a melodious journey that has blossomed ever since.

Maria’s musical adventure began at a very young age when she started singing in the children’s choir at her church. Over time, she was exposed to many different styles which culminated in her pursuing a formal education in music theory with specialized training on the saxophone. She enhanced her singing technique by studying under the tutelage of established international vocalist Laura Copiello. Marco’s fate was sealed with his first sampling of an Eric Clapton recording and he soon developed a voracious appetite for other contemporary blues musicians. His curiosity led him to research the early pioneers of blues including Robert Johnson, Blind Lemon Jefferson, Lead Belly, T-Bone Walker, Son House, and Muddy Waters. At age 18, he began studying the guitar under the direction of noted Italian jazz guitarist and composer Simone Guiducci and immediately began performing with fledgling bands in local clubs.

Some years later in 1998, the two met in her home town of Mantova as Marco was working with a professional theatre company and Maria was attending a three-day workshop. They soon established their own company for a brief time before going their separate ways. As fate would have it, they would meet again in 2000 in Venice as they were both enrolled at Università Ca’ Foscari Venezia and they soon re-kindled their interest for theatre. Over time they discovered a mutual passion for blues and by 2008 they were writing and performing their own original compositions. They settled on the name “Aruspika” which they explain is a combination of the words “Acoustic,” the sound that permeates nearly all their music and “Haruspices,” which describes the ancient oracles that practiced divination.

After several years of performing live, and encouraged by their friends and musical colleagues, they recorded their first album “Non sono io” during the fall of 2012 in their home studio. The album contained 10 acoustic-blues-flavored American-folk-style songs that featured the contributions of guest musicians Nicola Bardini on saxophone, Moulaye Niang on percussions, Andrea Presciuttini on keyboards, and Maria’s brother Giovanni Ghelfi on harmonica. “Blue Caffé,” “Il divano,” “Domenica sera,” and “Amore dove Sei” were among the album’s most listened songs. Numerous performances throughout northern Italy followed and culminated with a 2014 Summer Midwestern tour in the U.S. including several radio interviews premiering their debut album.

Upon their return to Italy, and fueled by this international experience, they began work on new songs and desired to form a more stable, full-ensemble. They developed friendships with several local musicians and enlisted the talents of Lallo Orlandi on rhythm guitar, Davide Gerardi on bass and Nicola Catino on drums. The group quickly developed into a tight-knit band with the ultimate goal of releasing a second album. To achieve this objective, they undertook a successful crowd-funding campaign in the late fall of 2015, which, in turn, allowed them to confidently enter the Digitube Recording Studios in Mantua to record, mix and master their follow-up album “Nubiran – Il pianeta dell’amore” (2016) under the watchful eye of noted producer Carlo Cantini. The 12 songs contained therein span a range of musical styles from upbeat rock-n-roll to sentimental acoustic ballads and easy-listening pop numbers to jazz-inspired pieces.

Aruspika was once again graced with invaluable contributions from guest musicians such as Carlo Cantini on violin, Mauro Negri on clarinet, Riccardo Biancoli on percussions, Giancarlo Zucchi on piano, and the return of Giovanni Ghelfi on harmonica. The band has expressed its pleasure with the final product as the group achieved a richer and more dynamic sound than the first recording while still conveying a broad range of emotions, from a feminine point of view, through the incorporation of new musical styles that were introduced to the band through its three new members. Songs such as “Giu d’esercizio,” “Brezza del mare,” “Night Talkin,’” and “Dove vai” have already become fan favorites.

Aruspika has begun a regional tour in support of their new release and are contemplating a return to America in either late 2016 or early 2017. For more information, visit their website at www.aruspika.com.

Tweet
More in this category: « An interview with Giada Valenti Alessandra Amoroso »