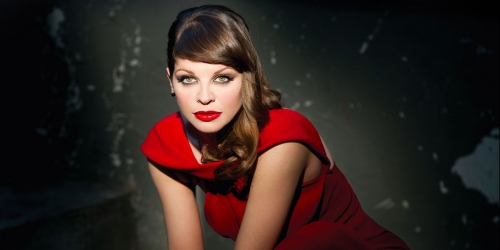 It has been said that "If a person thinks they are defeated, then they already are." Conventional wisdom also asserts that, "If one can dream it, then they can do it." Success and failure may be more closely related than we might imagine. Many great stories of achievement have been written by those individuals who used their past failures to fuel their eventual successes. The story of Italian female vocalist Alessandra Amoroso, born on Aug. 12, 1986 in the comune (village) of Galatina, nestled in the "heel" of the Italian boot in the province of Lecce, located in the southern region of Puglia, is an example of grit and determination in her ascension up the Italian pop music ladder.

She was drawn to music as a child and began singing with the goal of practicing and developing her natural vocal talents. As an adult, she later would refine her skill by performing in competitions and venues all throughout Lecce. Having accomplished all she could at the local level, Alessandra chose to seek her fame and fortune at a national level. Her first opportunity arrived in 2003, when, at age 17, she auditioned for a chance to appear on the 3rd Edition of Maria De Filippi's television talent show "Amici." She performed well during the tryouts phase but fell just short of being selected for participation in the event. Undeterred, she returned home to her parents and continued working odd-jobs that would help to support her during this formative period.

She subsequently participated in the 2007 "Fiori di Pesco" singing competition held in nearby Brindisi and captured first place. After five years of reflecting on her progress and buoyed by her recent success, Alessandra again auditioned to participate in the 2008 "Amici" television program and was finally granted admission. Her performance during the competition was so highly regarded that she was given the rare opportunity to record a single entitled "Immobile" which immediately shot up to the top of the FIMI (Federazione Industria Musicale Italiana) music charts. In January of 2009, she reached the finals of the competition and was soon outclassing all other contestants on her way to capturing first place on March 25, 2009, which included a cash prize of 200,000 â¬. Her performance also earned her the "Premio della Critica" (Critic's Choice Award) which included a music scholarship of 50,000 â¬. With these earnings she began a period of formal education that had been lacking during her earlier development and she chose noted soul, blues and jazz singer/songwriter Luca Jurman, to be her mentor.

Her second single "Stupida," which was released just days after winning, was an instant hit and became one of the most downloaded songs during that spring. Her new label Epic, a subsidiary of the Sony BMG Music conglomerate, capitalized on her newfound popularity and released her debut recording, the EP "Stupida" (2009). The album was certified gold and shortly thereafter achieved triple-platinum status. Alessandra was recognized by the Italian Wind Music Awards, for having one of the top selling albums of the year.

Never losing sight of her humble beginnings, Alessandra sought to repay her good fortune by undertaking philanthropic objectives such as becoming the spokesperson and staunch supporter for the "Associazione Donatori Midollo Osseo" (Association of Bone Marrow Donors). Alessandra set out on an aggressive 36-city tour in support of her new recording that took her all throughout the peninsula. She found the time to join Laura Pausini and other noted Italian female recording artists for the "L'amiche per l'Abruzzo" (Girlfriends for Abruzzo) earthquake benefit concert that was held at Milan's San Siro stadium on June 21, 2009 in front of 60,000 spectators.

She returned to the studio to release her first full-length album "Senza nuvole" (2009) and the recording would yield four hit singles over the course of the next eight months. The album was certified quadruple-platinum during that time. Her good fortunes continued as she was invited by Italian recording legends Claudio Baglioni and Gianni Morandi to collaborate with them on musical projects. Alessandra's first appearance at Sanremo in 2010 was in the capacity of special guest as she performed on the duet "Per tutte le volte cheâ¦" with contestant and eventual Festival winner Valerio Scanu. She continued her breakneck pace of recording and touring as she released her second full-length recording "Il mondo in un secondo" (2010). This album likewise yielded four hit singles over the course of eight months and achieved quadruple-platinum status. Alessandra finally decided to capture her best moments from her live performances and released them on her first live album "Cinque passi in più" (2011). The recording also contained five inediti (previously unreleased songs) and was another big seller as it attained triple-platinum sales. The success of the album spawned the DVD version of the recording including rare backstage footage. Returning to the studio, Alessandra released her third studio album "Amore puro" (2013). The recording spawned five singles over the course of 10 months and displayed her mass appeal and staying power. The album attained double-platinum status and featured contributions from noted Italian stars such as Tiziano Ferro, Biagio Antonacci and Federica Camba. She embarked on a 23-city, seven month tour immediately afterwards where she played in large venues in front of the largest crowds ever in her career. Her next challenge was to cater to the huge Spanish-speaking market releasing the all-Spanish album "Alessandra Amoroso" (2015). An international tour that featured stops in Spain, Argentina, Mexico, Puerto Rico, and the U.S., exposed her to new audiences and experiences. During this time, she also made numerous promotional television appearances. Upon her return to Italy she made her film debut in a cameo appearance in Marco Ponti's comedy "Io che amo solo te" (2015).

Her most recent release "Vivere a colori" (2016) displayed a change in her musical style as the songs featured a more sophisticated sound and compositional arrangements. Musical collaborations with Elisa and Federico Zampaglione introduced a harder-edge and profound lyricism, as she sought to move away from her normal soul-tinged ballads. The album has already achieved platinum status just two months after its release and she has received the highest critical praise reviews ever in her professional career.

For more information you can visit her website at www.alessandraamoroso.it.