Opera in the Italian Garden 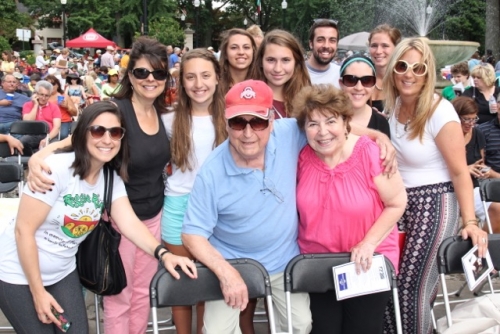 Opera in the Italian Garden

The popular free concert "Opera in the Italian Garden" on July 26, 2015 broke attendance records with 2,174 concertgoers. That represented 431 more attendees than last year. All were present to hear Opera Circle Cleveland's performance of well-known music from famous Italian operas. The Italian Garden has been presenting the concerts since May, 2008 and attendance has increased every year for this popular event.

Standing ovations greeted Director Dorota Sobieska and her talented singers after their arias and popular Italian songs. Due to the large attendance, people with picnics spilled over from the upper level garden into the lower level amphitheater onto the lawn.

Tenor Mikhail Urusov, who has appeared at La Scala and the Bolshoi Theater, Director Sobieska, who has appeared at opera houses in Europe, and the Opera Circle artists had the crowd on its feet during the concert. The grand finale featured Italian songs originally performed by the Three Tenors, with three tenors Urusov, Matt Jones, Brad Paller, baritone James Binion and bass Christopher Aldrich. Laura Avdey's rich mezzo wowed the crowd with her arias, accompanied by Jacek Sobieski, Svetlana Ivanova and narrator Wanda Sobieska. Matt Selvaggio of Little Italy Wines offered free wine tastings to the crowd and wood fired pizzas were made on site. FIAT of Detroit displayed a few of the new FIAT 500x cars.

The Italian Cultural Garden Foundation continues its mission from 1930 offering the cultural arts of Italy to the public. This free performance was presented as part of the foundation's "Viva! La Cultura Italiana" cultural events. If you wish to receive information about next year's concert, call 216-916-7780. Give us your email, and we will add you to our distribution list!

Tweet
More in this category: « East side, West side, all around the town... La Mia Strada / My Road »