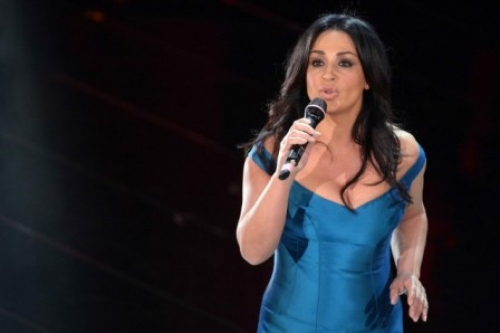 Humility, goodness and greatness are a rare combination of qualities that most of us strive to achieve but are rarely able to attain simultaneously. When we encounter such individuals that possess these traits, we are immediately drawn to them and fascinated by their seemingly effortless ability to motivate and entertain us. Maria Nazionale is among those precious few who seem to have an instinctive capacity to reach the masses through her many talents.

She was born on July 31, 1969 in the comune (town) of Torre Annunziata in the province of Naples within the southern region of Campania. As with many of today's most popular entertainers in Italy, she showed an early interest in the arts and began singing while still a young child. Her fondness for her Neapolitan culture permeated her very being and was quite evident later when, as a young teenager, she began to perform publicly by entertaining spectators in piazzas, music venues and religious ceremonies. Later, during one of her performances as a young adult, she attracted the attention of noted Italian composer Franco Chiaravalle, who was so captivated by her vocal prowess and natural stage presence that he urged her to transfer to Milan.

It was there, in the heart of Italy, that she began her professional entertainment career and signed her first recording contract with the EMI record label. Maria participated in her first major music festival performing at the prestigious 1986 Festivalbar Singing Competition as she presented the song "Ragazzo Solo" and later at the 1986 Premiatissima Music Competition as she performed "Scema io te voglio bene." She, also, was in high demand for television appearances on RAI 1, RAI 2, RAI 3, and Canale 5 broadcast networks. As a result of her growing popularity, EMI encouraged Maria to record her debut album "Maria Nazionale" (1993), which was produced and arranged by Chiaravalle. The album contained her two previous hit singles and eight other new songs with Chiaravalle having a hand in composing all 10 tracks. The styles on the recording were widely-varied, including ballads, synth-pop, disco-dance, and electronic-beat compositions in both Italian and Neapolitan. It was hoped that this composite of genres would have broad-based appeal but, the results were lukewarm and the label chose not to renew her contract.

Undaunted, Maria's second album "Addo'..." (1994) was recorded and released on the upstart independent Parcheggio record label and would be her last recorded directly to vinyl. The album displayed improved continuity and a sharper focus on her considerable vocal skills which had been overlooked on her first record. The compositions were again in both Italian and Neapolitan but this time featured stronger backing vocals and simple acoustic musical accompaniment. These changes contributed greatly to the improved overall quality of the album, which, in turn, lead to increased sales and greater acceptance among the critics. Pleased with the results, Maria entered into a long-term recording arrangement with the independent Duck Record music label of Milan where she enjoyed greater freedom and minimal interference with her recording and touring schedules. She immediately released her third album "Ha da passà 'a nuttata" (1994) and satisfied her desire to pay homage to her Parthenopean heritage and recognize the period of the post-war allied troop occupation of Italy, especially in the Naples area during her parents era prior to her birth. The recording contained classics such as "Chella 'lla," "Scapriciatiello," "Scalinatella," and "Munasterio 'e Santa Chiara," with each receiving her most heartfelt and passionate interpretation. Maria would then set a precedent of releasing an album per year until the end of the final decade of the previous century. "Dolci ricordi" (1995), "Napoli... ti amo" (1996), "Storie 'e femmene" (1997), "ò Coré 'e Napule" (1998), and "Sentimenti" (1999) all feature her trademark vocals and collaborations with Neapolitan greats such as Nino D'Angelo, Mario Merola, Tullio De Piscopo, and Nuccia Fumo. Each recording contained a predominant theme such as classic Neapolitan songs from the 17th century, female-dominated compositions, contemporary Neapolitan pieces, societal and economical inequities, and songs running the gamut of emotions.

With the advent of the new millennium, Maria expanded her resume by satisfying her desire to perform on the silver screen as she was cast in a supporting role in the blockbuster non-fictional organized crime film "Gomorra" (2008) directed by Matteo Garrone and based on the best-selling book of the same name written by Roberto Saviano. She also provided three songs to the movie's soundtrack and her performance earned her a nomination for the prestigious "David di Donatello" (Italy's Oscar) for best actress in a supporting role. Maria next appeared in the short-film feature "Biondina" (2011) directed by Laura Bispuri. She also provided music to the soundtrack of the full-length feature drama "Tatanka" (2011) directed by Giuseppe Gagliardi. She has collaborated as a guest on recordings by Italian artists Francesco De Gregori and Ambrogio Sparagna.

Maria has appeared at the Sanremo Music Festival twice, first in 2010, as a guest performer, singing a duet with Nino D'Angelo on his entry "Jamma jà," and then as a participant in the Big category of the 2013 competition as she presented the song "Quando non parlo;" finishing in 10th place among the 14 contestants. Her most recent recordings "Scema io te voglio bene" (2004), "Terra mia" (2005), "Puortame a cammenà" (2008), and "Libera" (2013) are among her best-selling albums as they feature a commercially-friendly style without relinquishing her commitment to her proud Neapolitan culture. The songs recount true stories about the people, places and emotions of a city that she still devoutly calls home. For more information you can visit her artist page "Maria Nazionale" on Facebook.