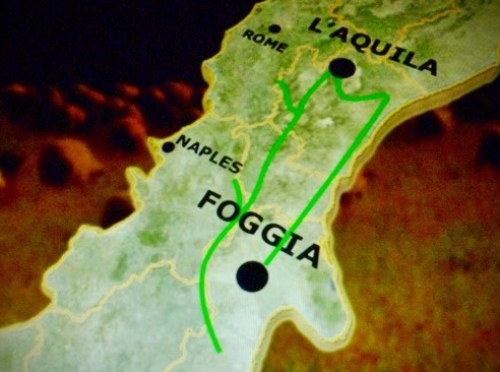 While producing a documentary in Italy for John Carroll University, Dr. Santa Casciani (Associate Producer) introduced Michael DiLauro, Cleveland-born five time EMMY Award Winning filmmaker, to the Transumanza phenomenon, the centuries-old culture of long distance sheep herding. In his feature length documentary "La Mia Strada/My Road," DiLauro renews his ancestral ties to this disappearing way of life. Along the way, the viewer is treated to interviews with present day Italian shepherds, to emotional encounters with DiLauro's Pugliese relatives, and to the haunting Abruzzese music sung by the DisCanto group (www.discanto.net) and by Youngstown's Fernando Rubino and Iole Checcone.

Above all, this is a beautifully filmed movie about memories lost and recovered, both bitter and sweet. It boasts many moving moments. For example, we view heartfelt interviews in the U.S. and in Italy as DiLauro connects the two cultures. People speak of separation from loved ones and the resulting losses of culture and language. And, joyfully, DiLauro records the moments his U.S. family encounters with their Italian cousins in the town of Ascoli Satriano.

"La Mia Strada/My Road" was screened at the Palestrina Film Festival in Italy, and at the Atlantic City Film Festival. The film was awarded a Silver Medal from the Media Communications Association-International Film Festival along with several cultural centers and universities throughout the U.S. In Nov. 2013, the documentary kicked off the Chicago Catholic Immigrant Conference: "The Italians," sponsored by Loyola University, Casa Italia, and the Italian Cultural Institute Chicago.

It's easy to see why the Youngstown Historical Center for Industry and Labor chose to screen "La Mia Strada/My Road" for the Mahoning Valley. Southern Italy, in the mid to late 1800s, suffered an economic collapse not unlike what Youngstown and many Rust Belt communities endured after the closing of the area's steel mills. For Italy, it was the end of seasonal sheep herding on an industrial scale. The resulting hardships in Abruzzo, Molise and Puglia sent hundreds of thousands of Italians to North and South America. Driven by the collapse of heavy industry, Youngstown residents left in droves for work in the U.S. Sunbelt and West.

"La Mia Strada/My Road," in English, will be shown on Sept. 24 at 5 p.m., at the Youngstown Historical Center for Industry and Labor, 151 W. Wood St., Youngstown (across from St. Columba's Cathedral). For information call Dr. Donna DeBlasio, 330-941-3158. A trailer is available at http://lamiastrada.org.

Tweet
More in this category: « East side, West side, all around the town... "Eh, Cumpari" its Julius La Rosa »