Christmas is Alive in Assisi 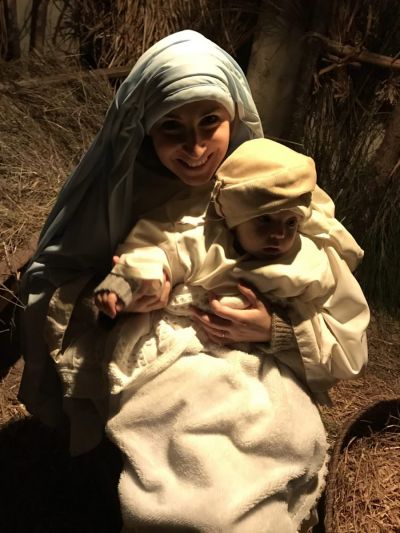 Last-minute shopping forays, hours of cooking up a feast, gift-wrapping marathons, and a furious flurry of holiday party preparations are important elements of Christmastime for many. However, in some tiny mountain villages of Umbria, the locals live their Christmas in another way:  by serenely bringing to life the first Christmas.

San Francesco created the first living creche (presepe vivente) in the early 13th century in the Latium mountain town of Greccio. The tradition lives on in small villages near Assisi, San Gregorio, Armenzano, and Petrignano, where the villagers dress up and act out scenes from Bethlehem on December 24, 25 and 26 and January 1 and 6 (when the Magi arrive!).

We arrived in Armenzano on January 1, just prior to the arrival of the “Holy Family” heading to their stall to get dressed. Soon after, at the village entrance, a Roman soldier flanked by two robed elders awaited the arrival of the other crib scene participants. Day was giving up to night as a procession of Biblical figures filed into the village, no longer Armenzano but Bethlehem now. Visitors were welcomed to the living crib scene by an elderly bearded Prophet passionately announcing the imminent birth of a King.

The walled medieval town of Armenzano was transformed into Bethlehem at the time of Christ’s birth. The vaulted medieval cellars and alleyways backdropped scenes of basket-makers, a street market, carpenters, wool-carders, a blacksmith, a shoemaker, cloth dyers, weavers, and a mill where wheat was being ground into flour. A little girl helped bake breads in an outdoor oven, another worked at a potter’s wheel near her father. A few doors down, a young man in a tunic was grinding herbs with a mortar and pestle.

At the top of the town, Herod bellowed out his fury from the castle. We stopped at the stall to see the Babe which had infuriated Herod. A donkey placidly munched hay as he gazed at Gesu Bambino. Visiting children offered him fistfuls of hay before they headed on with their parents to see more of the Armenzano presepe vivente wonders.

Surely, this was a Christmastime they will remember for years to come.

View the embedded image gallery online at:
https://www.lagazzettaitaliana.com/travel/9278-christmas-is-alive-in-assisi#sigProId905ccb648b
Tweet
More in this category: « A Taste of Italy, Los Angeles Style The Goldsmith Art in Abruzzo »