The Goldsmith Art in Abruzzo 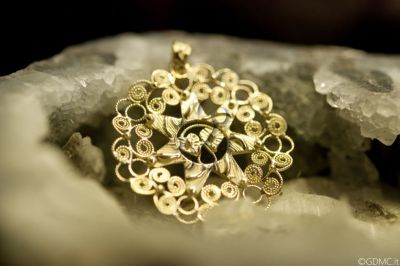 One of the interesting and ancient traditions that the Abruzzo region boasts is certainly the art of goldsmithing. The most used materials are coral and gold. The latter is worked with a particular technique called filigree workmanship. The Abruzzo goldsmith tradition is rich in symbols, both sacred and pagan, which are still alive in this region. Many Abruzzese women wear at least one of these traditional jewels known as the presentosa, the heart of Abruzzo, the button, the pescarina, or the red coral, to represent the strong bond they have with their region.

At the end of the 19th century on the Adriatic coast and in particular in the town of Giulianova, the manufacturing and carving of red coral began. Several goldsmiths opened prestigious manufacturing businesses where this precious material was worked on with an unprecedented technique called faceted. The skilled goldsmiths used only the highest quality coral imported from the Cape Verde Islands. These coral jewels were also in demand outside of Abruzzo, especially in Milan, Paris and London. The ancient art of coral manufacturing was abandoned at the beginning of WWII and with it also the splendid villa-workshop of Giulianova with its precious floors decorated with coral dust. Even today, this unique gem symbolizes good luck and fertility and it is often donated in the form of a jewel to wish good luck and prosperity.

In addition to working with coral, the art of filigree gold, a form of intricate metalwork, is still practiced today to create pieces such as the presentosa. La Presentosa is a traditional jewel from the Abruzzo region, a very ancient piece of art dating back to the 18th century. It became famous when the poet Gabriele D'Annunzio described it in his masterpiece “The Triumph of the Death” as a large filigree star with two hearts linked by key or ribbon. This jewel was often given to young women as a promise of love. The word comes from presente, present or gift, which evolved into presentenza and presentosa in the local dialect.

Tradition has it that on the day of the formalization of the union between the betrothed, the presentosa was donated by the future in-laws to the future bride as a token of love. The presentosa in this case also represented the symbol of fidelity and eternal love. The presentosa was also donated by mothers to girls of marriageable age. In this case, it was represented with a single heart and symbolized the search for a husband. Today there are similar jewels. The pescarina is also made with the same gold filigree workmanship but embellished with precious stones and starfish in its center as a reminder of the  Adriatic sea.

The heart of Abruzzo is a jewel that can be created both with filigree workmanship and solid gold workmanship. Its meaning is very interesting because it is linked to pastoral transhumance. Once upon a time, this locket was given by a shepherd to his beloved as a token of love before leaving for the mountains. In return, he would receive a strand of the woman’s hair that he would carry with him during the long absence. The heart also holds other symbols: the sun, the symbol of male fertility; the moon, the symbol of female fertility; the horn, a symbol of lucky; and the beading pattern along the edge represents budding, the renewal of life. Finally, its horn-heart shape symbolizes luck. Good luck to all!

Tweet
More in this category: « Christmas is Alive in Assisi FUNK OFF Rocks Orvieto »