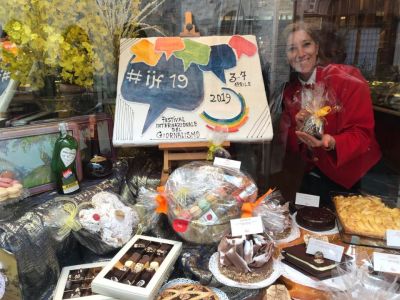 Over 600 journalists, photographers, professors, and intellectuals and more than 100 volunteers, students and aspiring journalists from 19 countries participated in over 300 events filling Perugia’s theaters, frescoed medieval guildhalls, elegant hotels, and the noble palazzi for the biggest annual media event in Europe.

La Gazzetta Italiana contributor Anne Robichaud (www.annesitaly.com) attended the event. She chatted with a journalism student from northern Italy who, teaming up with a French student, both returned to work at the festival again as they had done in previous years. They shared their enthusiasm about the festival as an illumination on world events, a “training ground” for their hoped-for future profession. In a conference room nearby, a group of journalism students from Grenoble who were working with their professor on reports on the festival, also lauded the festival as one of the most important media events in the world. All of the festival sessions are free to anyone on a first-come-first-serve bases.

Of the more than 600 speakers who participated in over 300 events, 49% were women. The topics covered included: fake news and “disinformation,” affronting global climate change, artificial intelligence, freedom of press and human rights in war-zone countries, humanitarian crises of immigration, new technologies in the field of journalism, and a swing to the right in the governments of Hungary, Brazil and Austria, to name a few. Many of the speakers drew long lines, wowing attendees at sold-out venues.

Jaclyn Corin and David Hogg, two young Americans from “March for Our Lives,” both survivors of the Parkland, FL shootings in February 2018, spoke on the need to limit access to arms in their country and in general.

Anne had the opportunity to hear a presentation by Carl Woog the Director of Communications for WhatsApp, the world’s largest private messaging platform. In fact, Mr. Woog even selected her from the crowd and answered her question during his Q&A segment. Afterwards, in the hotel bar where he was sharing drinks with a friend, he graciously posed for a photo with her.

Chris Potter, co-founder of the festival (with Arianna Ciccone), summed up Perugia’s Festival Internazionale del Giornalismo in a final-day interview as “the best media event in the world.”