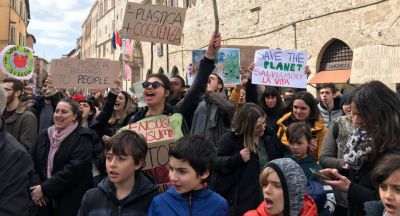 On August 20, 2018, Greta Thunberg, a 15-year-old Swedish student, skipped school and sat on the steps of the Swedish parliament holding a sign that said “Skolstrejk för klimatet” – “School Strike for the Climate.” To protest the lack of action on the climate crisis, she decided not to attend school until the 2018 Swedish general election the next month. Her demands were that the Swedish government reduce carbon emissions in accordance with the Paris Agreement which has a long-term goal of keeping the increase in global average temperature to well below 2 degrees C above pre-industrial levels and to limit the increase to 1.5 degrees C since this would substantially reduce the risks and effects of climate change.

Born to a Swedish opera singer and an actor, Greta was diagnosed with Asperger Syndrome, obsessive-compulsive disorder and selective mutism after she became depressed and stopped talking at age 11. She said that selective mutism means that she was only speaking when she needed to and that “now is one of those moments.” Since then, Greta and her family have become vegan and have given up flying to decrease their carbon footprint.

After the Swedish election, Greta continues to strike only on Fridays. She posted her protest on social media, gaining worldwide attention. The hashtags #FridaysForFuture and #Climatestrike spread and students (and adults) began to protest outside of their respective parliaments and local city halls all over the world.

On Friday, March 15, students and teachers in Perugia, Italy were part of Greta Thunberg’s global alliance of nearly 2,000 cities in 112 countries protesting. “Salva il pianeta!” was shouted throughout the medieval city as the passionate students protested for a call to action on climate change. Around the world, an estimated 1.4 million students banned together to demand change.

This global movement all started with a passionate student. A student who has since given a TEDx talk, presented in front of world leaders, received various prizes and awards for her activism and has been nominated for a Nobel Peace Prize. A student whose passion began with a solitary peaceful protest that, in turn, ignited a global movement. UN General Secretary Antònio Guterres has endorsed the school strikes initiated by Thunberg admitting that, “My generation has failed to respond properly to the dramatic challenge of climate change. This is deeply felt by young people. No wonder they are angry.”

Although language and culture diversify these students, this common bond to save the planet easily translates. From Stockholm to Perugia and beyond, Skolstrejk för klimatet and Salva il pianeta are words everyone now understands.

For more information and to get involved, visit www.fridaysforfuture.org.