The Villa Giustiniani: a Family Home for Over 400 Years 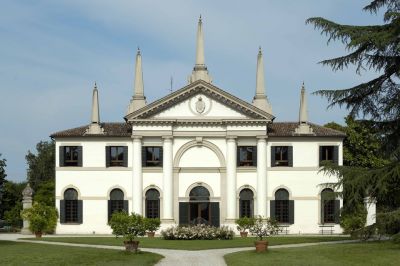 When you drive through the small agricultural villages of the Veneto, south of Venice, it all seems a little flat and uninteresting. However, this is an area rich in history and there are hidden gems to be discovered.

If you blink while you’re driving through the tiny village of Vanzo, near the Monselice exit of the A13 autostrada, you’ll miss a pair of tall, wrought iron gates at the beginning of an avenue of lime trees. At the other end of the avenue is one of the loveliest yet unknown villas of the Veneto, still lived in by the same family, unlike the many other villas which have become empty, faded museums.

Finding villas in Italy can often be rather confusing because they are usually named after the family who owns them and owners can change often over the years. In this case, though, it is known as the Villa Giustiniani and always has been.

The Giustiniani are a noble Venetian family, descended from not one but two doges: Giusiniano Partecipazio, Doge from 819-828, and Marcantonio Giustiniani from1684-1688. The present occupants of the Palladian part of the villa, Count Lorenzo Giustiniani and his wife N.D. (Nobil Donna) Roberta Soranzo are the responsible stewards of a heritage site.

Roberta and Lorenzo are proud of their heritage and keen to share it. They are also both enthusiastic gardeners, during summers gardening at 5am before the sun’s heat makes it impossible. What could be better than a morning personal-guided tour of the house and grounds followed by an aperitivo or the same in the afternoon followed by cakes and prosecco? In this manner, a tourist becomes more like a guest, or even a friend, and the visit feels not only special but original.

What will the tour include? First, the villa, which is much older than the impression given by the white façade. This Palladian frontage was remodelled by Baldassare Longhena (the architect of the Salute Church on the Grand Canal in Venice) in 1674. The pediment is particularly striking with its five obelisks on the roof, signifying the family of a Doge.

The interior is stunning. The main rooms facing the garden are frescoed with high ceilings and views over the garden. The “winter garden room” is particularly striking. You stand in a painted loggia with columns and exotic vegetation on all sides, but best of all, this loggia replicates the distant view from the villa itself, of conical hills – unmistakably the Colli Euganei, a group of extinct volcanoes 10 miles away.

The Countess, Roberta, has a vast collection of porcelain, from local potteries and elsewhere. There is a collection of teapots, unusual modern china decorated with asparagus and from the nearby town of Este, two distinctive collections with a vegetable theme. On the kitchen wall hang 18 white plates (once there were 20) of extremely realistic fruit and vegetables and on the hearth in front of the large stone fireplace are lots of shapely terracotta pumpkins, some very old indeed.

Family photographs add a very personal touch. There is a handsome photo of Lorenzo’s grandmother, Princess Beatrice Corsini, in a silver frame amongst recent photos of family weddings and grandchildren.

On the walls is a whole series of portraits of the Giustiniani family and Lorenzo has many interesting stories about his ancestors. Smiling proudly as he peers over his glasses, he begins a well-rehearsed tale, reminding guests that maintaining the family line was important to the nobility of Venice. In 1173 Venice was at war with Greece and all the Giustiniani family were killed apart from Nicolò, who was a monk. He was given special permission to marry Anna, the daughter of a doge, and they produced 12 children. When the last son was 16, the father returned to the monastery and the mother to a convent. They are venerated as Beato Nicolò and Beata Anna.

Saint Lorenzo Giustiniani, after whom Lorenzo is named, was the first Archbishop of Venice. He died in 1456.

Doge Marcantonio Giustiniani never married and therefore had no direct descendants, so the family line continued via the Doge’s brother, Girolamo, who commissioned the villa’s new Palladian frontage by Longhena.

A more recent Count Girolamo, Lorenzo’s father, was a member of the Guardia Nobile of the Pope, Saint Pio X in 1912 and the present Count Lorenzo adds a further distinction to the family line as the Delegate for Veneto of the Knights of the Sovereign Military Order of Saint John of Jerusalem, Rhodes and Malta.
The villa’s garden is 30,000 square meters of colour, light and shade. The grand avenue of lime trees leading to the main entrance is on a majestic scale all year round but comes into its own at the beginning of June when the blossom appears, giving an almost tactile sensation of walking through a wall of honey vapor. To either side are the sweeping flower beds and to the right, the orto (kitchen garden) and the orchard, which includes 100 lemon trees in weathered terracotta pots.

The garden has seasonal delights even in winter, but in spring there are collections of bulbs: colourful varieties of tulips, lilies, hyacinths, peonies etc. The glorious summer rose gardens are perhaps the highlight of the annual displays with over 300 traditional old varieties including ramblers, tea roses, damascene, and multiflora which originally came from the best growers in Italy, England, France, and Germany. Under the lime trees, rare varieties of cyclamen bloom in autumn as well as anemones, asters, verbena, and many more.

The Count and Countess are very knowledgeable about their plants: a visitor with a passion for horticulture would be in seventh heaven.

The title of this piece indicates that the same family has lived in this villa ever since its construction. However, during WWII, part of the villa became the German Military headquarters for the area, though some family members remained there as housekeepers and protectors. Fortunately, it remained unchanged.

So, over the past 400 years, this home has stood calmly on its own land facing the world, like Venice, with serenity. What family motto could be more appropriate than Fortiter sed Soaviter, “Strongly but Gently.” These two qualities are without a doubt the reason this lovely villa has survived intact and will continue to delight generations to come.