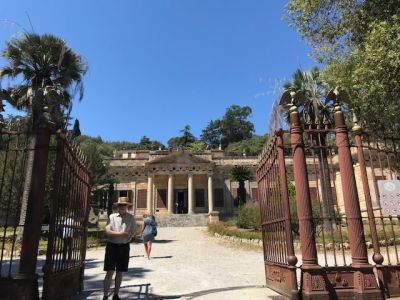 Even if you don’t know anyone who’s ever been to Elba and you’re unsure exactly where it is on a map, you’re sure to know its most famous resident.

Napoleon spent only 300 days on Elba after the fall of Paris in 1814. He was exiled there after the humiliating defeat of the Russian campaign, allowed to keep his title of Emperor but only of Elba’s 12,000 inhabitants rather than the 70 million people throughout Europe over whom he once reigned supreme.
His exile was quite a generous one, hardly a punishment at all. He arrived with 600 soldiers and lived in two pleasant mansions, one in Portoferraio and the other, with a large estate for his favorite pastime of hunting, in San Martino. His mother and sister were allowed to stay there with him, but not his wife. This didn’t seem to upset him in any way, though, as he was perfectly content to divide his time between his Polish mistress and a local girl.

Napoleon’s town house, the Villa dei Mulini, has a lovely garden with a spectacular view across the bay. In fact, it’s said that he preferred to sleep in the garden rather than in his lavish four poster bed. Perhaps he used his portable campaign bed which is on display in the villa.

There’s a discounted double ticket for visitors who also want to visit his country estate at San Martino, five miles inland, and probably the more interesting of the two mansions.

The building itself is very curious. First impressions are of a grand classical palazzo at the end of a long sweeping drive, but all this grandeur was added later by an admirer, Count Demidoff, when Napoleon had already left the island. The original villa stands intact on top of the flat roof of an extensive columned gallery. The rooms used by Napoleon include a bathroom complete with a fresco of a nude woman above the bath and an unusual Egyptian room designed to commemorate his successful Egyptian Campaign. A sunken pool in the centre of the room was used to grow papyrus and the walls are covered with paintings in the Egyptian style.

From the original villa, a decorated staircase leads down to the Demidoff Gallery below, a spacious area holding paintings and artifacts including a Canova sculpture of his sister Pauline.

When Napoleon arrived on the island, he expressed a wish to act as its magistrate and set about reforming its education and legal systems as well as building roads, draining marshes and developing mining industries. Napoleon even designed Elba’s flag. To the original white rectangle with a diagonal red stripe, he added three bees. There are various explanations offered about the bees. They say that the bees represent hard work and cooperation or are perhaps a reference to the Appiani family of Tuscany; but the probable reason for the bees is that Napoleon already used them as an imperial insignia. He had been in the habit of awarding flags and privileges to “bonnes villes” which were loyal to him and Elba was added to this list.

The influence Napoleon had on the island was amazing given that he was in residence for less than a year. His glamorous sister Pauline (whose green velvet gown is on display in the Villa dei Mulini) was the centre of social life and frequently organized parties. At one gathering, the wine flowed particularly freely and with his English captors too inebriated to notice, two French ships sailed into the harbour and spirited him away; back to France via his home island of Corsica.

But on Elba the memory of Napoleon lives on. Each year on May 5, the anniversary of his death in 1821, they celebrate Napoleon Day with the usual Italian gusto: feasting and processions which include a short local man dressed as our hero for the occasion.