From the Italian American Press - Dream of Venice Series 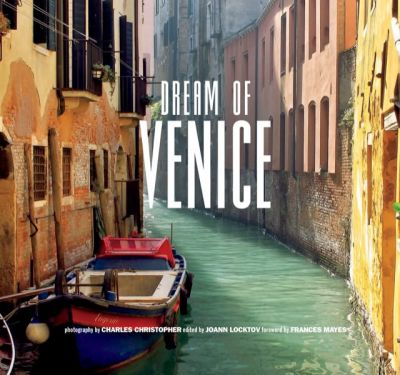 Venice, one of the most beautiful cities in the world, is losing its cultural identity. Over the years, it’s been taken over by tourists – most staying just one day – to the extent that UNESCO has warned the city it might be listed as a world heritage site in danger. Besieged by tourism, the city is being destroyed, but one frequent visitor, with her love for the beauty of Venice and her passion to preserve it, is actively involved in securing a positive future for the city.

JoAnn Locktov fell in love with Venice on her first visit over 20 years ago. Throughout the years, as she watched the city deteriorate, she was inspired by the “hidden Venice” she saw in the photography of Charles Christopher. That inspiration led her, as editor, to develop the Dream of Venice series of books.

The first book in the series, “Dream of Venice,” is a collection of stunning color and black-and-white photographs by Christopher, giving the viewer glimpses into a Venice that is rarely seen; but while glimpses are fleeting, the viewer can spend an infinite amount of time savoring each photograph. Narratives, ranging from a sentence to several paragraphs, accompany each photograph, matching words and scenes to create a perfect blend of sustenance for the mind and the eyes.

“Dream of Venice Architecture,” a 2017 Silver IPPY Award winner, focuses more on the broader Venetian landscape with panoramic views of buildings, piazzas and the water that flows through the city. Even the close-ups, though, are expansive – with each focal point emphasized by its surroundings. Essays by “architects and architectural writers” supplement the exquisite photography of Riccardo De Cal.

Although by different photographers, each book is filled with images that capture the city almost uninhabited. In the few photographs that do contain people, they are depicted as blurs, shadowy figures or diminutive compared to the scenery around them. It’s an interesting juxtaposition to the crowds of tourists that fill the streets. It’s estimated that around 60,000 people visit Venice each day, a city of currently 55,000 residents (and shrinking).

Light – natural and artificial – is also an important element. Many of the photographs show misty mornings, foggy twilights and hazy evenings, with buildings and streets shrouded in dew. Others show a streak of sunlight or a brilliant blue sky highlighting an object. Day or night Venice sparkles. And with the lights on, an ethereal glow is cast upon streets, buildings, bridges, and water.

As for the water – the common denominator of Venice, the liquid flowing through its veins, the base surrounding its underpinnings – it’s present in every photograph. Iridescent, gleaming, glistening, gray water blending into gray sky, lagoons as solid sheets of glass, multi-color mosaics, murky pools nestled against buildings, reflecting patterns, and streams of refracting light. Even when you don’t see the water, you know it’s there.

Anyone who has visited Venice and truly appreciates its beauty will treasure these books; and those who have not been to Venice – after viewing either book – will want to visit the locations photographed, stand where the photographer stood and take in the surreal beauty of Venice.

JoAnn is a strong supporter of Venice and its residents. During her most recent visit, residents were protesting the gates that were installed in an effort to reduce foot traffic on the narrow pedestrian-only streets. In an article for the British online news media “The Independent,” she said, “Today magnified the perfect storm that is taking place in Venice: uncontrolled tourism, uncontrolled hospitality development, zero infrastructure strategy for residents, tourists or the environment. There’s a lack of housing and a complete absence of respect for Venetian residents.”

A portion of the proceeds for all books in the series – a third is in pre-publication – are donated to non-profits that work to restore and maintain the culture of Venice.