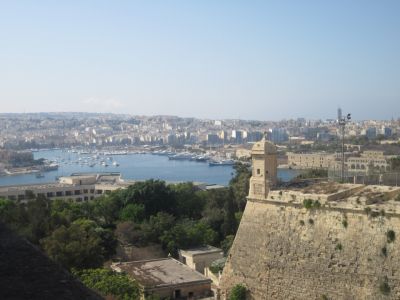 My first impression as the airplane door opened wide and revealed the ancient city of Valletta was that I had reached Northern Africa. The heat was intense and gave the illusion that a city existed and did not exist at the same time. I was also in a cloud of jet lag having traveled nearly 24 hours on 3 different planes. In fact, I didn’t know if it was time for a cappuccino or chamomile tea. Nonetheless, experience teaches us that first impressions are often deceiving; we don’t truly know what lies underneath the surface or what leads up to a specific moment. Many encounters over time, along with our will to dig deep within using patience and curiosity, will reveal the truest nature of an experience.

Charlie, my driver, was warm, welcoming and witty and so proudly and passionately gave me a crash course on Maltese history. He must have reviewed his notes before meeting me, I thought, for he quoted names, dates and specifics as if he was defending his PhD dissertation with me. I was so impressed. By the end of my first week in Malta, I had met many “Charlies.” All the Maltese I encountered were extremely proud of their islands, people, culture, heritage, religion, food, and language. Though not the financially wealthiest country in Europe, I found a wealth of education and high manners in all Maltese. They are prim and proper, showcasing British etiquette in exchanges accompanied by the charm of the Maltese language along with profuse Mediterranean charisma.

Maltese identity is an intricate puzzle of races and cultural backgrounds that make the islands authentic jewels in the heart of the Mediterranean. Here, European Baroque and ethnicities meet Northern African light and temperatures in an incredible and entertaining mosaic. I was entertained by life as it unfolded before my eyes, by daily interactions and routines.

I got lost in the beautiful Baroque alleys, mesmerized by a new dimension of Baroque, close to that of my native Sicily. I found myself going in and out of government buildings: the Ministry of Tourism, the Prime Minister’s Office, so much so that while studying its grand courtyard I suddenly heard a voice behind me ask, “Do you work here, Miss?” I smiled. “I’m a writer,” I responded. He was kind and allowed me to take some photos before I continued my walk. For all you know, I could have had lunch with the Prime Minister of Malta that day! An exciting encounter nonetheless. I certainly hope you have the chance to experience these breathtaking Mediterranean Islands and discover their intricate, unique and exotic beauty.

Tweet
More in this category: « From the Italian American Press - Dream of Venice Series Spello's Infiorate: A Floral Night »