A Wedding in Puglia as seen by an Italian American 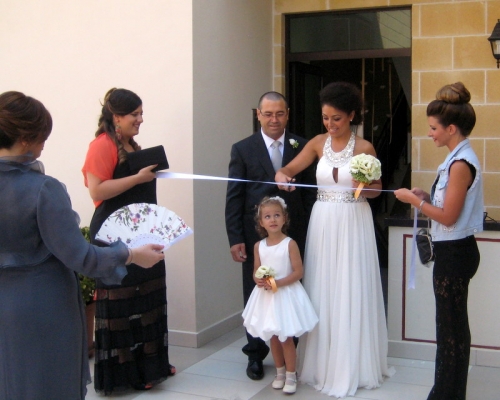 A Wedding in Puglia

While visiting family in Cassano Delle Murge during the spring of 2012, I was asked if I could return in August of 2013 for a wedding. I am also a distant cousin to the groom and was honored to return for the wedding and hope to convey to you a traditional wedding week in Puglia.

The bride and groom: Giuseppe Centoducati, 29 and Maddalena Angilillo, 28, are in the beauty shop business. They have dated for twelve years. Giuseppe has a brother, Gianfranco, and a sister, Selene. The parents of Giuseppe, Vito and Tina, have been very gracious to us during each visit there. Vito is a builder and Tina is a homemaker. Maddalena has two sisters, Carmen and Antonella. Her parents are Nicola and Celeste.

A week before the wedding, a party took place in Alta Mura that included the friends and family of the Bride and Groom. Called "Addio al nubilato e celibato", this party is similar to a combined Bachelor and Bachelorette party in the USA.

The night before the wedding, friends and relatives gathered secretly in the front of the Bride's parents' home. Traditionally, the "Serenata" is the final declaration of love by the groom for the Bride before the wedding. The Groom leads the group of friends and family. When all are in place, a live band begins to play. This alerts the Bride to the gathering and she appears on the balcony. Maddelena was serenaded by the Groom, then came downstairs and joined the well-wishers. There were nearly 200 people in attendance and the Bridal couple and guests danced, enjoyed food and beverage and celebrated for two hours.

On the morning of the wedding, close friends and family again gathered at the Bride's parents' home. Each of us was invited to go inside to greet Maddalena as she was being photographed. When she completed her photos in the house, she made her way down the steps. Before she crossed the threshold to leave her parents' home for the last time as an unmarried woman, she cut a white ribbon which was held by two of her close friends. The ribbon cutting at the door symbolizes the abandonment of the house of the bride and the advent of a new life together.

The Wedding Ceremony was held at 11:00 AM at St. Mary Assunta Basilica located on Moro Piazza in central Cassano. This was a Monday and it surprised me that the wedding was not held on a weekend as is common in the USA. I was told that weddings typically are held on any day of the week.Another significant difference in comparison to weddings I've attended, in the past, was that there were only two witnesses in the bridal party and both were females. The only other person in the bridal party was a young flower girl.

Her father escorted the Bride down the aisle, where the groom greeted her when she reached the altar railing. A Mass ensued and then the vows and rings were exchanged much as is done in America.After the wedding, the guests greeted the new Husband and Wife on the steps of the Church and they were soon motored away to the reception to be held in Canossa. Canossa is about an hour's drive from Cassano.

The reception facility was unlike any I have ever seen anywhere. Giardino del Mago (Garden of Magic) is stunningly landscaped with fountains, waterfalls, lush gardens and lawns. The facility itself is comprised of many different enclosures; this reception utilized four of them plus the outside area adjacent to the waterfall.

When we arrived, we were ushered to a large covered area with beautifully decorated tables. Music was softly playing and we were served wine, champagne, fruit drinks, and too many different appetizers to count. The Bridal couple made their appearance and came to each of the tables to welcome their guests.

After some time, we were all taken to another room and again seated at lovely tables. In this room, the Bride and Groom along with both sets of parents were standing at the front of the room and we made a line to meet and greet and offer our gifts.

Several more courses of food were delivered to our tables and of course more wine and other libations. At the same time, there was a live band playing and many joined in to dance after Maddalena and Giuseppe led the way.

We were then moved a third time to another room set up very similarly to the one we vacated. Course after course of food was delivered to each table with more liquid refreshments. The food was exquisite. This portion of the meal was finished off with espresso, after dinner liquors, cake doused with another liqueur. All the while, a live band was playing and many participated in very energetic dancing.

Finally we were taken to another room that was draped and backlit in purple. The entire length of the room was taken up with tables of an infinite variety of sweets. The desserts were delivered to the table along with wedding cake, fruits of every variety and of course any drink of your choosing. About 30 minutes after arriving in this last room, we were invited outside to the waterfall where the parents and the Bridal party were toasting each other and dancing a special dance. Lanterns were lit and sent skyward in a beautiful twilight display.

Live music plus a disc jockey provided more music and there was much dancing. Finally, toward the end of the evening there was the traditional bouquet and garter tossing. As the night concluded, we noticed that there was an extremely long table set up at the front of the room and beautifully wrapped gifts were piled high on it. The bridal couple and their parents were standing in front of the gift- laden table.

We formed a line and once again moved forward to greet them, and as we did, we were each handed two gifts off of the table. I later discovered one was a box of delectable Italian sweets and the other was a lovely figurine in porcelain.

The Bride and Groom had stayed to the very end of the reception that had started at about 1:00 PM and was ending at 10:00 PM.

In summary, this wedding and reception were on a grand scale that I could not have imagined. While there are many similarities to American style weddings, there were significant differences as well. If you ever have the opportunity to attend a wedding in Italy, please take it. For me, it was an experience that I will never forget.