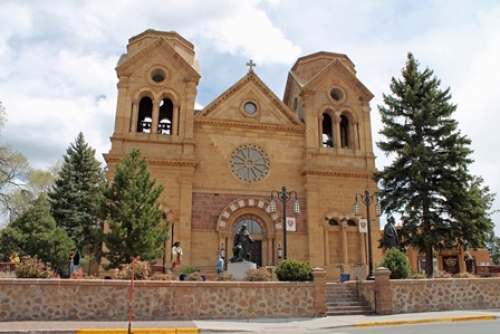 Two northeast Ohio churches have planned trips to Italy this year, and their respective itineraries are attracting a great deal of interest. Father Paul Rosing, pastor of Holy Family Parish in Stow, Ohio is taking his group north from September 7-21, 2014, weaving his way from Rome to Milan over 15 days and 13 nights. Father Philip Racco, pastor of St. Bernadette Parish in Westlake, Ohio and Father Joe Labak, pastor of Sacred Heart Church in Wadsworth, Ohio are venturing on a very unique tour of the south of Italy and Sicily from October 8-22, also for 15 days and 13 nights. Both tours were planned and will be lead by Peter and Donna D'Attoma of DaVinci Custom Travel and Tours.

Father Rosing's group leaves Cleveland on Sunday, September 7 and arrives in Rome on Monday, September 8 for their tour, "Italy's Classical North." While in Rome, they'll tour ancient Rome, visit the Vatican Museums and participate in a Papal Audience (held weekly by Pope Francis) in St. Peter's Square on Wednesday morning, September 11. From Rome, they'll travel north into Umbria and enjoy stops in Orvieto and Assisi where Father Rosing will celebrate a special group mass in the Basilica of St. Francis. They will then head to Perugia where the Goretti family will host a lovely luncheon and wine-tasting on the grounds of the Cantine Goretti Wine Estate on Friday, September 12. Before leaving Perugia, Father Rosing will celebrate mass in the Cathedral of Perugia on Saturday, September 13.

The tour continues moving north with stops in Spello, Florence, Venice, Barolo, Turin and Verona. While in Verona, the group will visit Romeo & Juliet's home, the Arena, Giusti Gardens and the historical city center. The tour of Turin will include an afternoon guided walking tour of the historic city with its lovely palaces and squares. On Thursday, September 18 the group will head to one of the country's finest wine regions, Barolo, where they will explore this charming village and the ancient castle that sits in the city's center. At the end of the tour they will enjoy a wine-tasting in the cellars of Marchesi di Barolo Wine Estate. The final destination of the tour is Milan, where they'll take a walking tour to include DaVinci's The Last Supper, the Galleria and La Scala Opera House with its beautiful gothic duomo. Father Rosing will perform a special mass in the duomo in Milan on the last day of the trip.

The October trip, "The Best of the South and Sicily," explores Sicily's stunning natural beauty and its incredibly diverse landscape comprised of rolling hills and valleys swathed in grapevines, medieval gems, historic Mount Etna and a dramatic coastline surrounded by beautiful islands. The group will visit Palermo and Monreale, Agrigento and the Valley of the Temples, home to some of the greatest Greek ruins in the world, rivalling that of Athens. The itinerary on Saturday, October 11 includes a trip to the beautiful coastal town of Taormina along the Ionian Sea followed by a visit the next day to Castello Degli Schiavi, setting for the famous movies The Godfather I and The Godfather III. The group will personally meet owner Baron Franco Platania, who will give them a guided tour of this famous villa.

From there the group will continue to visit the historical hilltop town of Savoca, and stop at the famous Bar Vitelli where Al Pacino met the father of his future bride in his film. The visit to Sicily will conclude with stops in Siracusa and Noto (the Baroch 'capital of the world'). The group will then cross into the mainland and the region of Puglia, Italy's "Piccolo California," renowned for its relaxed, easy-paced atmosphere, charming historical towns, the Adriatic Sea with its crystal clear blue and emerald green waters, fantastic foods, wine and authentic festivals including Positano Lecce (called the Florence of the south) and Alberobello (with the unique Trullis). From there, as they depart for the beautiful coastal town of Sorrento, they will stop in Mattera, (the setting for Mel Gibson's The Passion of the Christ), Pompeii (including the world-famous Abbey Monte Cassino), the Amalfi Coast, Ravello and the Eternal City of Rome. The visit to Rome will include a tour of Ancient Rome, the Vatican museums and a papal audience in St. Peter's Square on Wednesday, October 22. The tour of the Vatican will also feature a very special viewing of the Scavi below St. Peter's Basilica (burial place of St. Peter).

Both trips have been customized by Peter D'Attoma based on the interests of Fathers Racco, Labak and Rosing. Anyone interested in seeing the detailed itinerary to consider joining one or both of these tours should call Peter at 330/990-3291 or email him at This email address is being protected from spambots. You need JavaScript enabled to view it..

Photo Caption: Fr. Paul Rosing will celebrate mass in three historic locations during the "Italy's Classic North" tour including the Basilica of St. Francis of Assisi in Assisi, Italy.

Tweet
More in this category: « Sicilian Sisters Travel A Wedding in Puglia as seen by an Italian American »