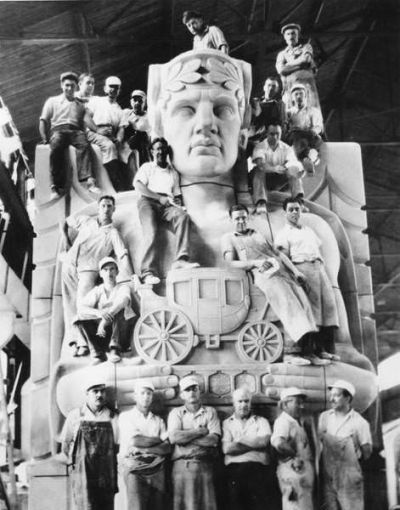 Cleveland’s Major League Baseball team did more than spotlight a piece of local history when it changed its name to the Guardians after the 2021 season. The renaming also shined light on a point of pride for the area’s Italian American community.

The Guardians’ name is taken from the “Guardians of Traffic,” eight massive Art Deco sculptures that stand on four sandstone pylons, a “Fungo” hit from Progressive Field on the Hope Memorial Bridge.

Modeled on the Greek god Hermes, who was known as Mercury to the Romans and was the patron of travel and trade, the powerful figures have stood sentinel over the bridge since it opened in 1932. Each 43-foot figure, whose design is credited to Cleveland architect Frank Walker, holds a vehicle representing a phase of progress in transportation: a hay rack, a covered wagon, a stagecoach, a passenger car, and four types of trucks.

Originally known as the Lorain-Carnegie Bridge, the span was renamed in 1983 for the family of entertainer Bob Hope, a Clevelander whose father, an English immigrant, worked as a stonemason during construction.

Most of the stone carvers who crafted the Guardians, however, were Italian immigrants. The majority were men from the small village of Oratino, Campobasso, according to Pamela Dorazio Dean, curator of Italian American History at the Western Reserve Historical Society and director of the Italian American Museum of Cleveland.

Rather than being forgotten over the years, Dean said, their role went unmentioned at all. “They weren’t artists. They were humble in that,” she said. “They were craftsmen who were just doing their job to put food on the table. That speaks a lot to their character. But they were very proud of what they did. They had amazing skill.”

Their descendants and paesani did know of their work, however. So did people in Cleveland’s Little Italy neighborhood, where the sculpting of the Guardians took place at the Ohio Cut Stone Co. on Random Road. The history began to emerge more widely during the bridge’s four-year renovation and 1983 rededication.

The history has particular relevance for members of Unione E Fratellanza Oratinese, the support society formed by immigrants from Oratino in 1924. Current president Anthony “Tony” Pinto said the group is working to get permanent historical designation for the Random Road site. Trustee Anastasio “Andy” Pucella said it is important also to remember the toll taken on workers, some of whom died from silicosis caused by breathing silica dust.

Pinto’s godfather’s father, Domenicantonio Mastrangelo, was among the Guardians’ carvers and, like others, a member of the Oratinese. Loretto Petti, who was the society’s first vice president, is remembered at the Italian American Museum in an exhibit displaying his photograph, passport and carver’s tools, donated by his grandson. It stands near Frank Walker’s architectural drawing of the Guardians, from the collection of the Western Reserve Historical Society.

Pamela Dorazio Dean, who has extensively researched the Guardians, said Oratino has an ancient tradition of stone carving. The men who were skilled in working with stone were called scalpellini. Sculptor Giuseppe Carabelli recruited many to come to Cleveland, around the turn of the 20th century, and work at his Lake View Granite and Monument Works across from Lake View Cemetery. He helped many settle in Little Italy, then known as Cleveland’s East End.

The Ohio Cut Stone Co. set up shop there because of the skilled workforce, Dean said, and because the adjacent railroad line connected with its quarry in Amherst, in Lorain County.

Cleveland’s former Indians said they chose the Guardians name and image because the iconic stone figures “have come to symbolize the spirit of Cleveland – resilient, hard-working and loyal.”

Besides having deep roots in local history, the Guardians carry an element that looks to the future. According to John Grabowski, chief historian for the Western Reserve Historical Society, researchers have found that one of the unidentified trucks held by the Guardians exactly replicates a vintage delivery truck that happened to be electric powered.

“The Guardian name fits in perfectly with what Cleveland is all about,” said Pinto. “Cleveland was well known as a multicultural, progressive city that embraced manufacturing and had opportunities for all who chose to live here. The Guardians overlooked the flow of transportation and opportunity.” “They put the small town of Oratino on the map in the United States.”

The Italian American Museum of Cleveland, sponsored by the Italian Sons and Daughters of America and a partner of the Western Reserve Historical Society, is at 12111 Mayfield Road, Cleveland, and iamcle.org. 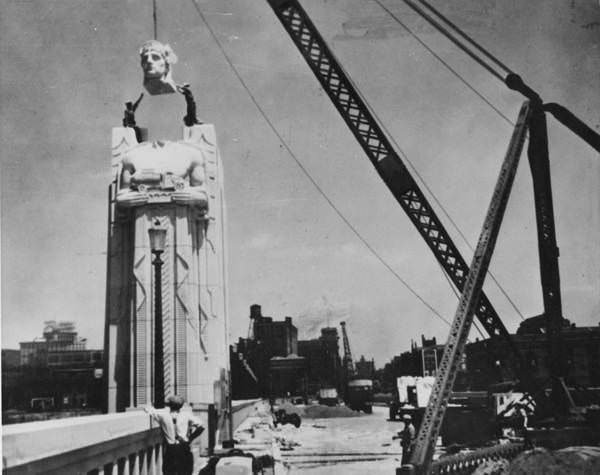