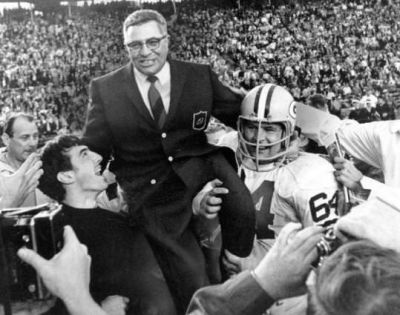 In the 1960s, the Green Bay Packers ruled the NFL with 5 NFL Championships (three in a row - 1965, 1966 and 1967). Their coach was Vince Lombardi, the venerable one, who led the Green Bay dynasty and was voted by ESPN in 2000 as the Coach of the Century. Their championship record still stands: No NFL team since Lombardi's Packers has ever won three in a row.

It was Lombardi's tremendous leadership to motivate and inspire players to play their best that transformed NFL coaching. Observably, Lombardi was the conduit and responsible for turning the losing Packers into a championship team in just three years.

The Packers only won one game the year before Lombardi became head coach. With team development, he harnessed togetherness and nurtured a belief in each other that allowed players to perform collectively beyond their perceived physical and mental abilities, chasing perfection and achieving excellence in the process.

Under Lombardi's direction, the Packers clinched six division titles, five NFL Championships, two Super Bowls victories (I and II), achieved an overall record of 98-30-4 and compiled a winning percentage of .758, the highest in NFL history.

In 1967, after nine phenomenal winning seasons with the Packers, Lombardi decided to retire as head coach and become the general manager. After a year away from the sideline, Lombardi yearned to coach again. Recruited by other teams, the offers were irresistible to Lombardi. He accepted a head coach position with ownership with the Washington Redskins. Lombardi kept the winning reputation alive by leading the Redskins to a winning record of seven and five in his only season. This was the first winning season for the Redskins in 14 years.

In January of 1970, Lombardi's coaching career tallied an impressive 105-35-6 overall record with no losing seasons in his remarkable 10-year watch as the greatest of all time in the NFL. Deservingly, the NFL named Lombardi, "Man of the Decade" and ESPN named Lombardi, "Coach of the Century." Lombardi was inducted into the NFL Hall of Fame in 1971, following his untimely and tragic death in 1970.

No head coach in NFL history has been quoted more on winning and leadership axioms than Vince Lombardi. He was ahead of his time in the 1960s, creating a winning system as a classic model of leadership for all professions and occupations to emulate. Nowadays, mention “Lombardi” and a certain magic still lingers in the name.

When speaking about winning and character-building in organizations, Lombardi comes to mind. If business people speak about the importance of punctuality and preparedness, they are reminded about “Lombardi time” (i.e. 10 minutes earlier than the scheduled time) and a “commitment to excellence,” sacrificing for the greater good, the organizational goal.

There will probably never be a coach and leader with a better ability to organize, rally the troops and win. In many schools, sports and corporate structures, Lombardi contributions are revived every time there is a call for team improvement and winning.

Lombardi learned from his parents, his religion (Catholicism), the Jesuits at Fordham, and great coaches like Fordham’s Jim “Sleepy” Crowley, a disciple of Notre Dame’s Knute Rockne, Earl “Colonel Red” Blaik, West Point’s best-ever and Jim Lee Howell of the New York Giants. History certainly chronicles that Lombardi’s work was remarkable. He was the attentive and engaging student of the game who embellished the work of coaching notables to a new height of coaching genius and sport leadership.

Everything that Lombardi spoke about, leadership, character, commitment, and discipline, naturally led to winning like free-flowing tributaries merging into the main river, swiftly and upstream with impetus. The name, Lombardi, in America has become synonymous with winning. After all, “Winning isn’t everything; it’s the only thing” (vincelombardi.com). That celebrated axiom is probably recalled more often than anything else Lombardi has profoundly stated in his great coaching tenure.

He (2001) wrote: “I wish to hell I’d never said the damned thing. I meant the effort. I meant having a goal…I sure as hell didn’t mean for people to crush human values and morality.”

The intensity of such an enormous statement on winning is received differently by people as is evident, but its impact is surely felt by most. Coach Lombardi also wrote: “The will to excel and the will to win – they endure” (Lombardi, 2001). This statement reflects what Lombardi wanted to say, originally, because he was always focusing on the will: The will to win is what fuels the run to win.

The goal for Team Lombardi was winning. Winning was the company mission.

The company business was football and his organization was the Green Bay Packers. Lombardi (2001) spoke about the rigors of the football organization and its objective on winning:
"Being part of a football team is no different than being a part of any other organization – an army, a political party. The objective is to win, to beat the other guy…They know the rules, and they know the objective, and they get in the game. And the objective is to win – fairly, squarely, decently, by the rules, but to win."
As a result, Lombardi was criticized for making winning the most important goal in a game of brutality among men. Lombardi’s critics accused him of callousness and insensitivity.

In defense of his strong emphasis on winning, Lombardi fired back, repeatedly saying: “If it doesn’t matter who wins or loses, then why do they keep score?” (vincelombardi.com). They keep score because the winners need to be recognized and rewarded for their commendable efforts. Lombardi affirms the grace of winning:
"I firmly believe that any man’s finest hour, the greatest fulfillment of all that he holds dear, is the moment when he worked his heart out in a good cause and lies exhausted on field of battle – victorious" (vincelombardi.com).

Winning places the victor on the highest rung of success; conversely, according to Lombardi, losing is never laughable and it is the time when men need to examine themselves, a soul-searching experience if you will, and make that firm resolution to battle back more competitively than before.

Lombardi would eventually accept a loss on the field because “after all, we are not perfect,” he would say, but the effort had to be a solid one. However, he was discerning and consoled his players about losing, saying:
“In great attempts, it is glorious even to fail" (vincelombardi.com). Losing was not a habit or practice for the Green Bay Packers and it did not happen often during Lombardi’s winning reign in the NFL.

Lombardi also spoke to the importance of discipline and consistency as the necessary cogs of the winning formula when he wrote:
"Winning is not a sometimes thing: it’s an all the time thing. You don’t win once in a while; you don’t do the right thing once in a while; you do them right all the time. Winning is a habit. Unfortunately, so is losing" (vincelombardi.com).

Lombardi spoke to the importance of faith along with discipline toward achieving the winning formula. He was right: faith is the belief system within the individual and discipline is the orderliness and the rightful actions that the individual performs to become a winner. Lombardi spoke to the importance of the grinds, the efforts in life:
"And in truth, I’ve never known a man worth his salt who in the long run, deepdown in his heart, didn’t appreciate the grind, the discipline." (vincelombardi.com).

Lombardi believed that the grinds, the knocks and the repetitions are the building blocks of outstanding efforts and a winning team.

No one in football has been able to duplicate the winning ways of the Green Bay Packers of the 1960s. History proves Lombardi right on winning. Winning is Lombardi.