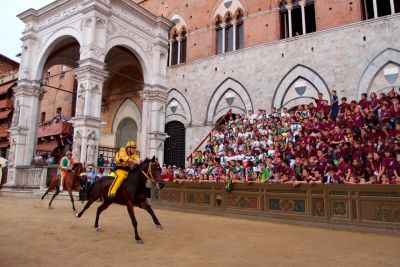 Ten riders and their trusted horses take to the track to race biannually in Siena, Italy’s Palio di Siena. Known simply as Il Palio by the local crowd, this competition takes place on two days each year: July 2 (Palio di Provenzano) and August 16 (Palio dell’Assunta); and the race days are approaching quickly.

The jockeys, known as contradaioli in this competition, each belong to one of 17 contrades. The contrades are specific districts in Siena and each contrada has their own color and icon to represent them. The icons vary from animals to objects to nature and some examples of these icons include the drago (dragon), selva (forest) and civetta (little owl). Although there are 17 total contrades, only 10 of them are chosen to participate each year.

This horserace isn’t a newly established event as it actually began centuries ago, although the more modern rules weren’t incorporated until many years later. The race used to be involved with politics, but now it is only for fun and sport. The race currently takes place in the Piazza del Campo, a very well-known area of Siena. It consists of three laps around the piazza, only lasting between one and two minutes. There are times when a horse may finish the race without the jockey riding and the horse is dubbed cavallo scosso.

The Palio di Siena is a very popular event which attracts enormous crowds. In fact, tickets need to be purchased months in advanced in order for one to attend the event. Some people try to reserve certain areas close to the race before anyone else can. Devoted race-goers camp in the area overnight to secure the best viewing area for the competition.

There is a certain risk for those competing in this horserace. If a contrada has not won the race for a great deal of time, they are referred to as the nonna (grandmother) in jest. If several years pass and a win is still not achieved, the title nonna evolves to a dead contrada. Some contrades that had the nonna title were the Torre, the Civetta, the Bruco, and the Lupa. Although the Lupa hasn’t won a race in nearly 30 years, the Aquila had recently claimed the nonna title from them in July of 2016. Certain contrada have specific rivalries with each other and when a rival loses, the other contrada celebrates as if they themselves have won!

The threat of failure is worth the risk, as those who claim victory take home not only money and fame, but a large, gorgeous hand-painted banner (palio or drappellone) created just for the winning contrada as well. The contrada with the most wins is said to be the Oca (goose), which has claimed more than 60 victories throughout the history of the race.

Although the race has great popularity in Italy, there are controversies surrounding the event. Riders are able to slow down their rivals in various ways, which may lead to injury of the horse or, in some cases, even the death of the horse. The Palio di Siena carries controversy with its occasional animal mistreatment, although the Italian public has a more positive view of the traditional event.

The Palio di Siena will take place on July 2 and August 16 and there’s no doubt that Siena is now alive with energy as the days approach. Whichever racer and their horse may grab first place is a mystery, while the race itself is sure to be a spectacle to observe. Let the race begin!